What is an Old Cut Diamond?

Brimming with rarity, there are a myriad of types of Old Cut Diamonds. The best known and most common within vintage and antique jewellery are Rose Cut Diamonds, Old European Cut Diamonds and Old Mine Cut Diamonds. Unlike contemporary Diamonds, antique Old Cut Diamonds are often individually hand cut, meaning that each one is unique. The end result is beautiful sparkling Diamonds that reflect and refract the light in different ways, creating a more romantic look. 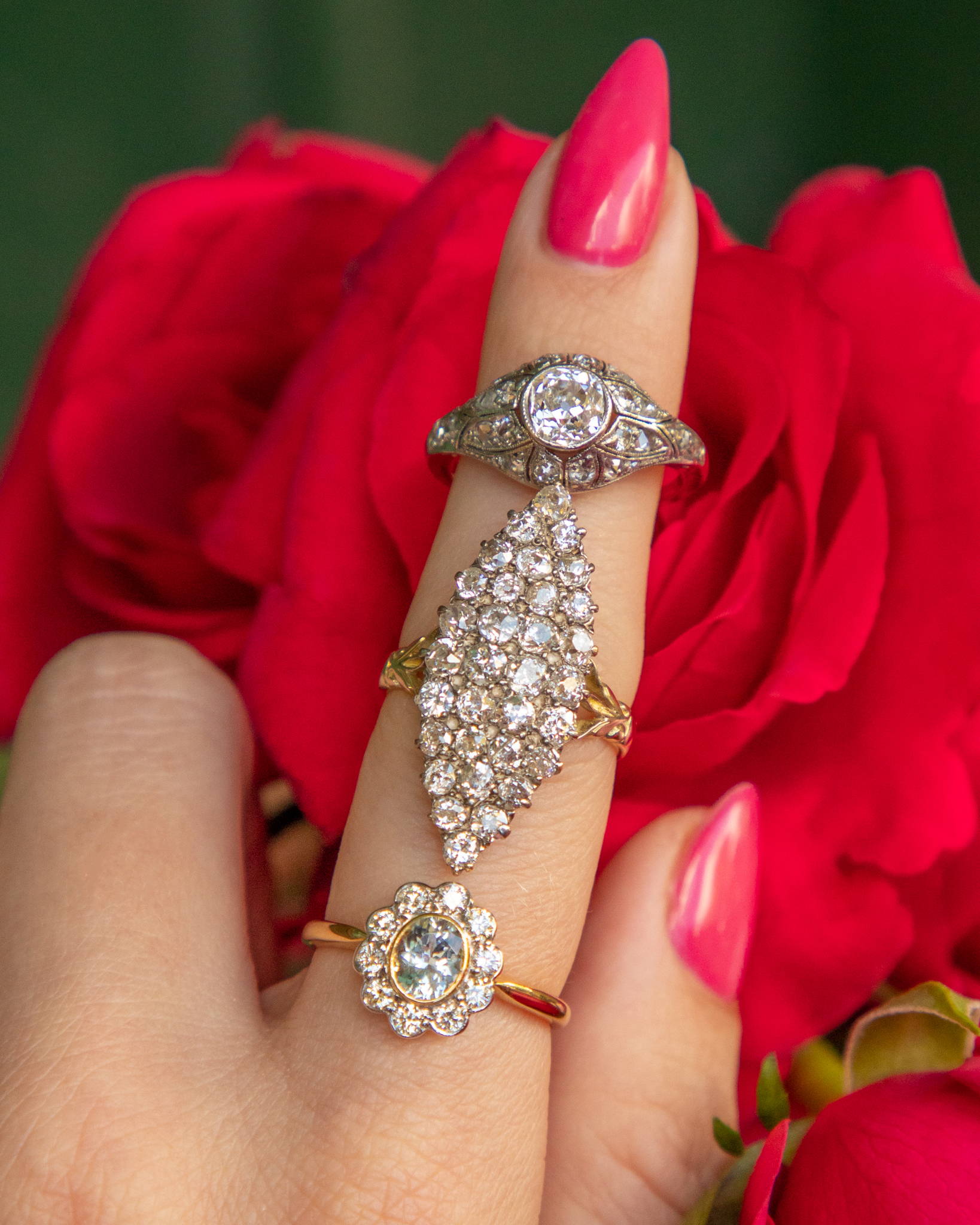 Unless you are buying an antique engagement ring or antique Diamond pendant, it is quite difficult to source contemporary Old Cut Diamonds, due to the industry preference for contemporary cuts. However, fellow treasure hunters and jewellery connoisseurs know that Old Cut Diamonds are special creatures, and there has been a recent revival in vintage and antique style jewellery. So perhaps we are more likely to find these cuts of Diamonds in pendants and rings very soon! Below, we detail the Diamond cuts you are most likely to find in antique jewellery. 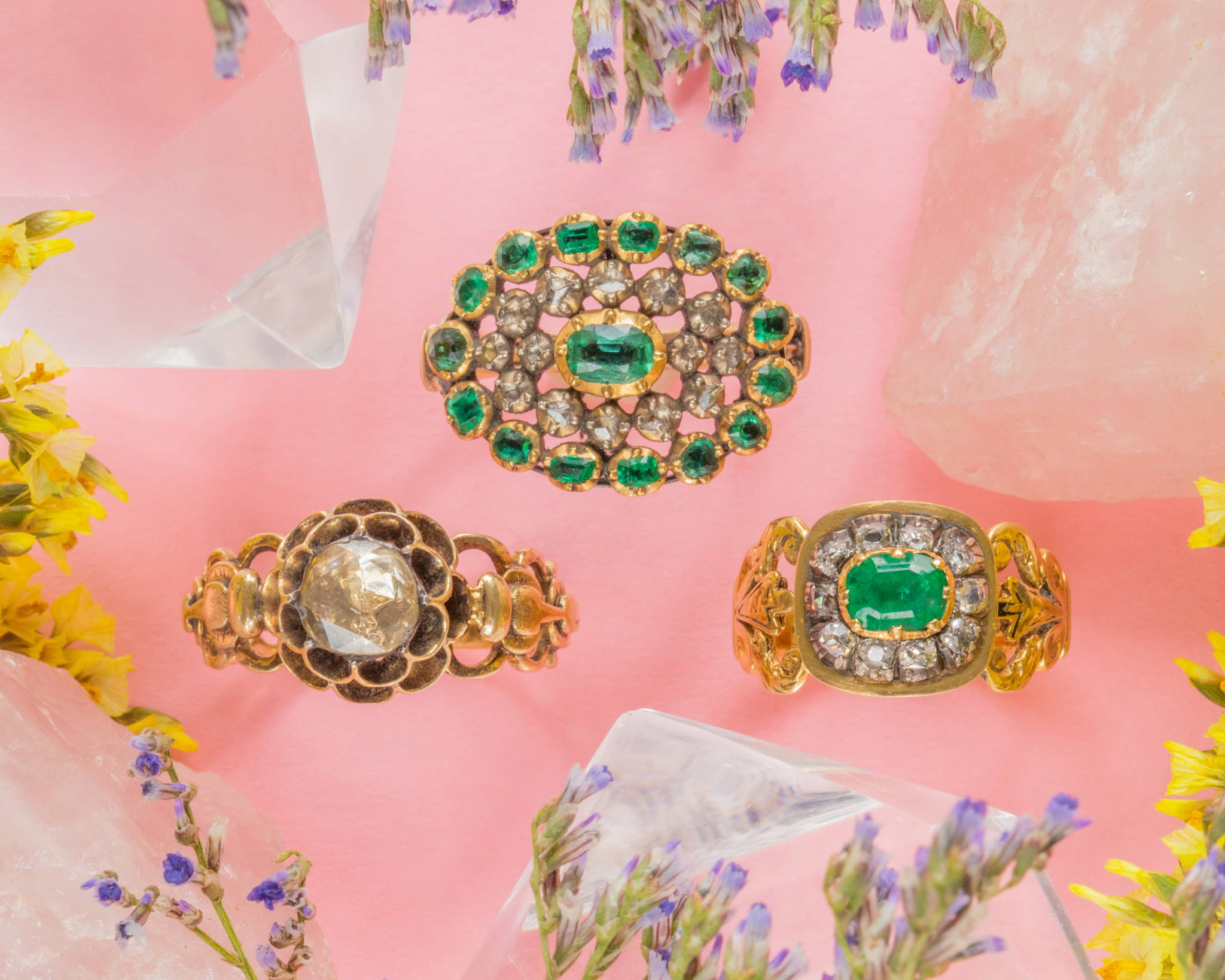 What is a Rose Cut Diamond?

Designed to mimic the shape of a rose bud, a Rose Cut Diamond is one of the fairest Diamond cuts of them all! In fact, they are one of the most historic Diamond cuts, dating back to the early 16th century, making them the Diamond cut of choice all the way up to the mid Victorian era. Some of the best examples of Rose Cut Diamonds can be found in Georgian Diamond rings, simply because they are natural and they are just oozing with old world charm and enchantment. 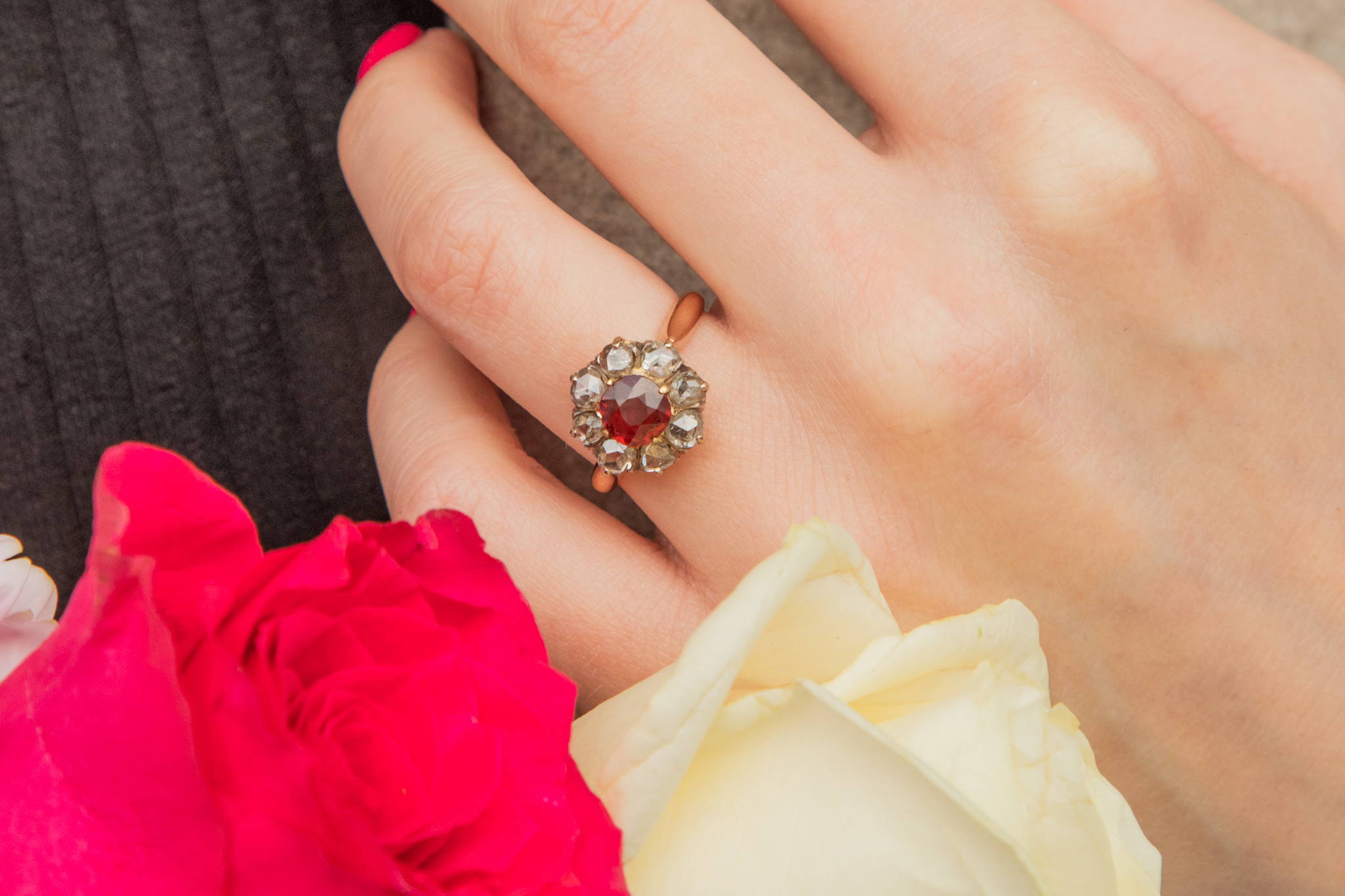 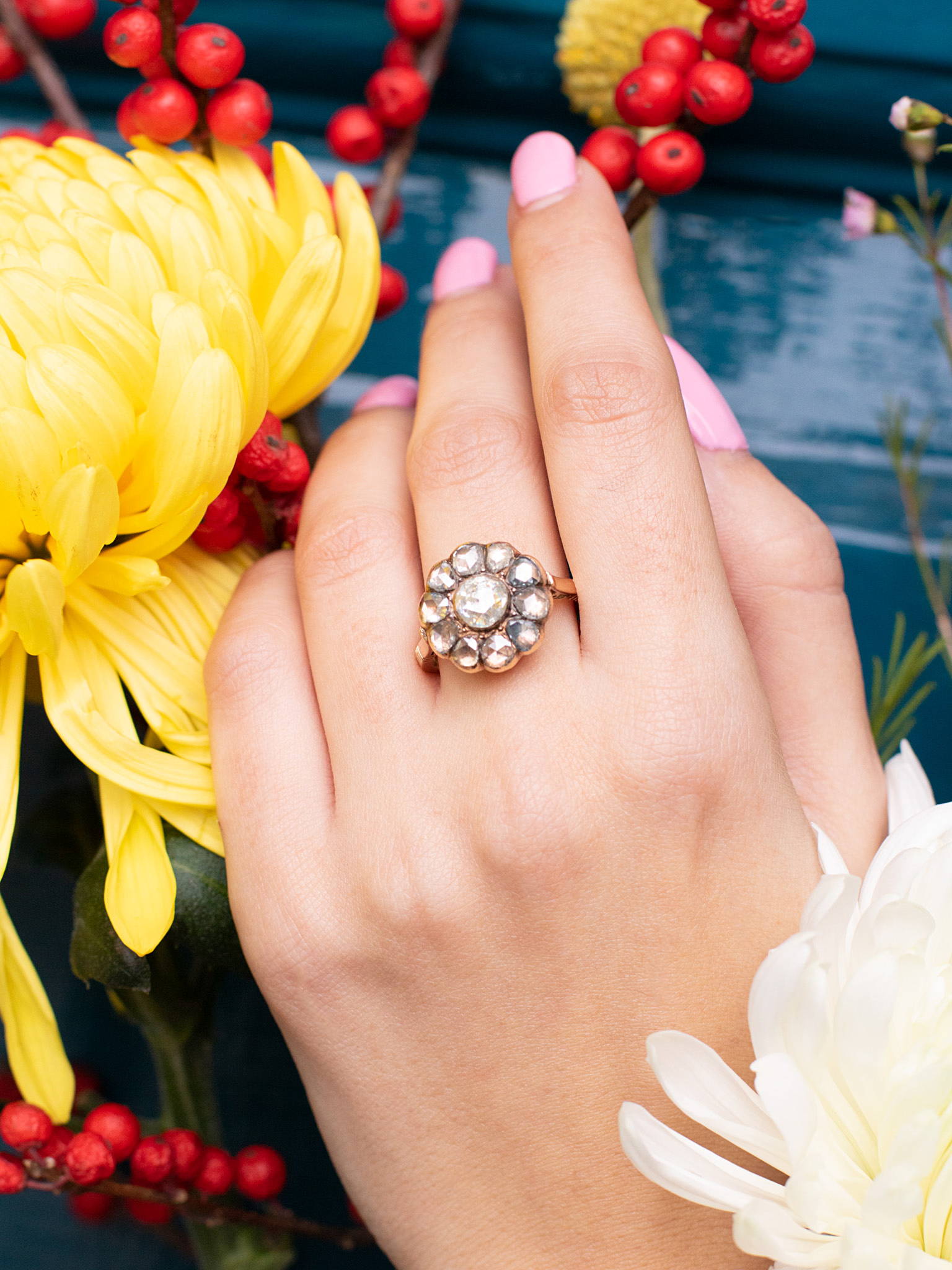 What is an Old European Cut Diamond?

What is the difference between an Old European Cut Diamond and Round Brilliant Diamond? 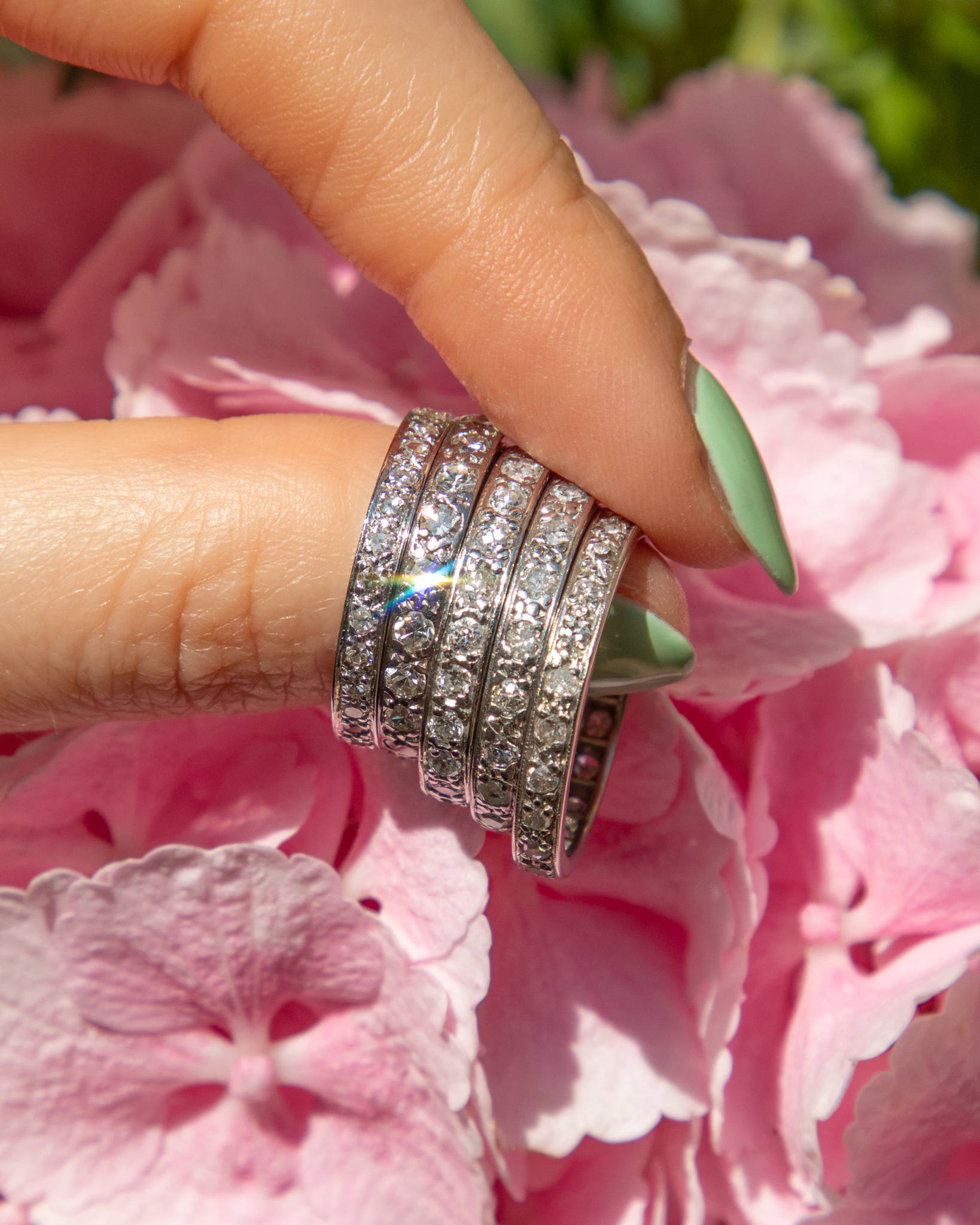 But like their similar shape, there is also another key similarity. Old European Cut Diamonds and Round Brilliant Diamonds share the same facet number: 58.

What Is An Old Mine Cut Diamond? 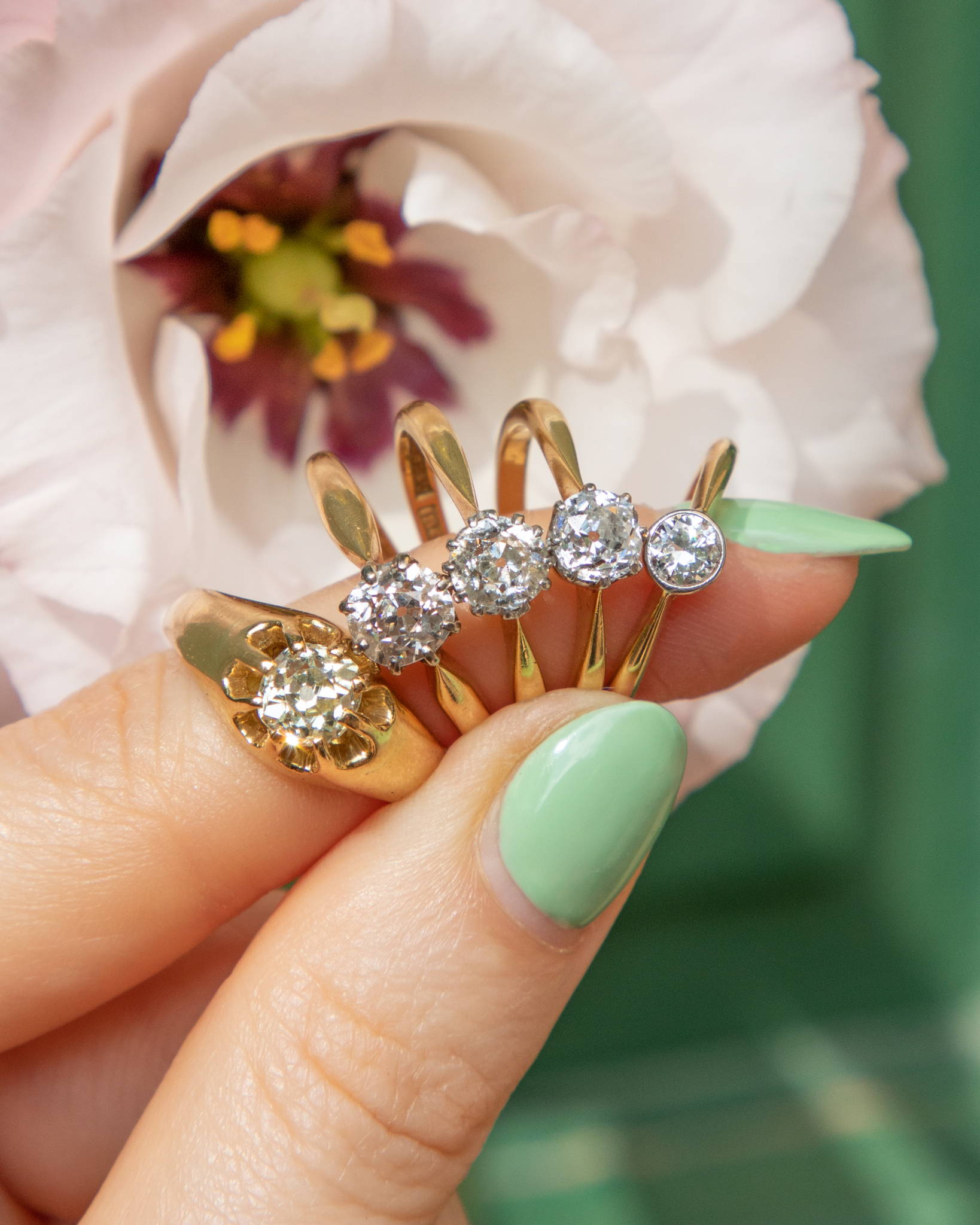 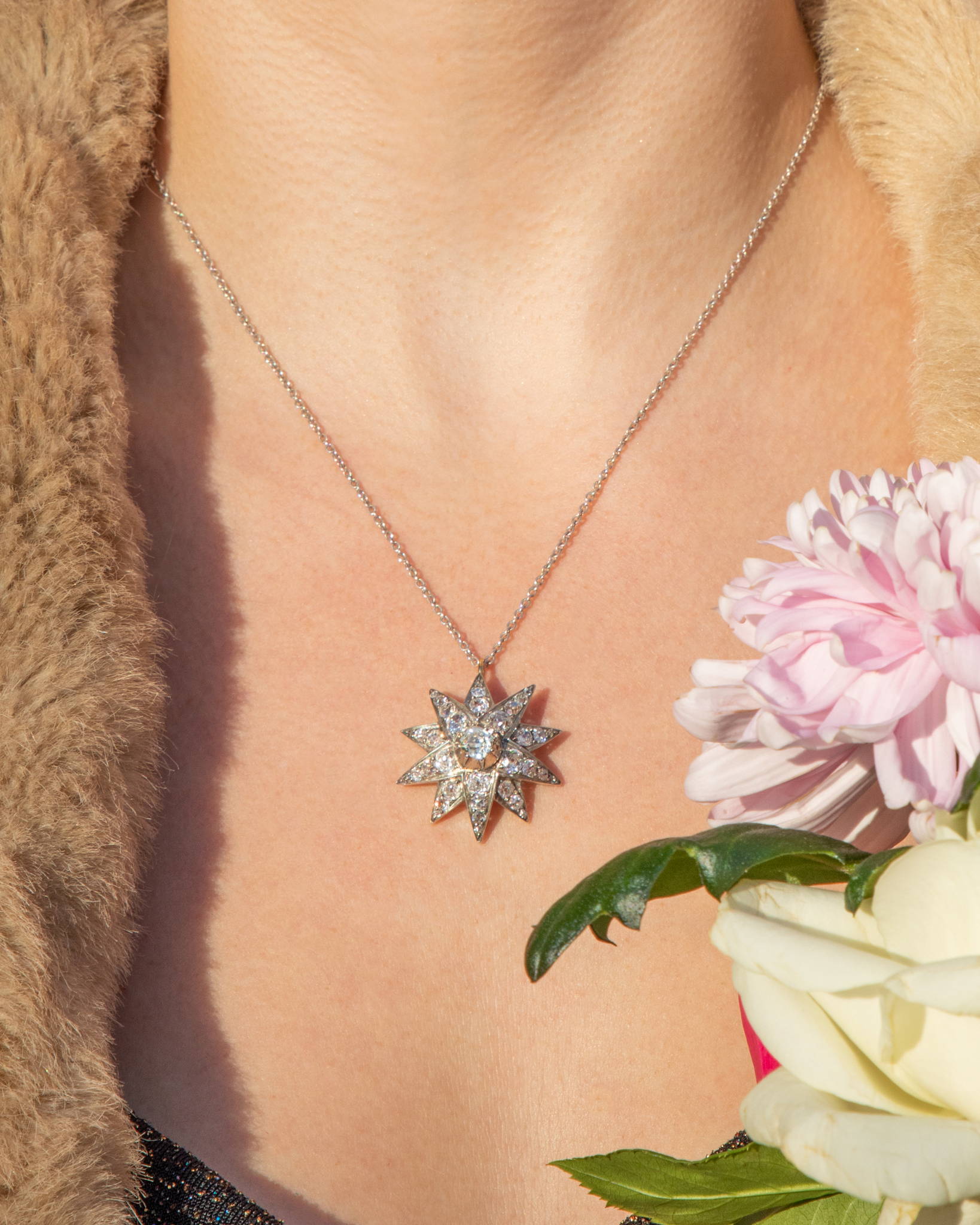 Why is it called an Old Mine Cut Diamond? Whilst there isn’t any discernible evidence to suggest why Old Mine Cut Diamonds have attained their signature name, it is believed that the origin comes from rough cut earth-mined Diamonds that would easily be found in Victorian and Georgian Diamond rings and pendants. In the 18th and 19th century, Diamonds were sourced from India and Brazil, with the former being known to produce larger carats and Diamonds of exceptional quality. In the 1860s Diamonds were discovered in South Africa, in keeping with the colonial expansion of the west. 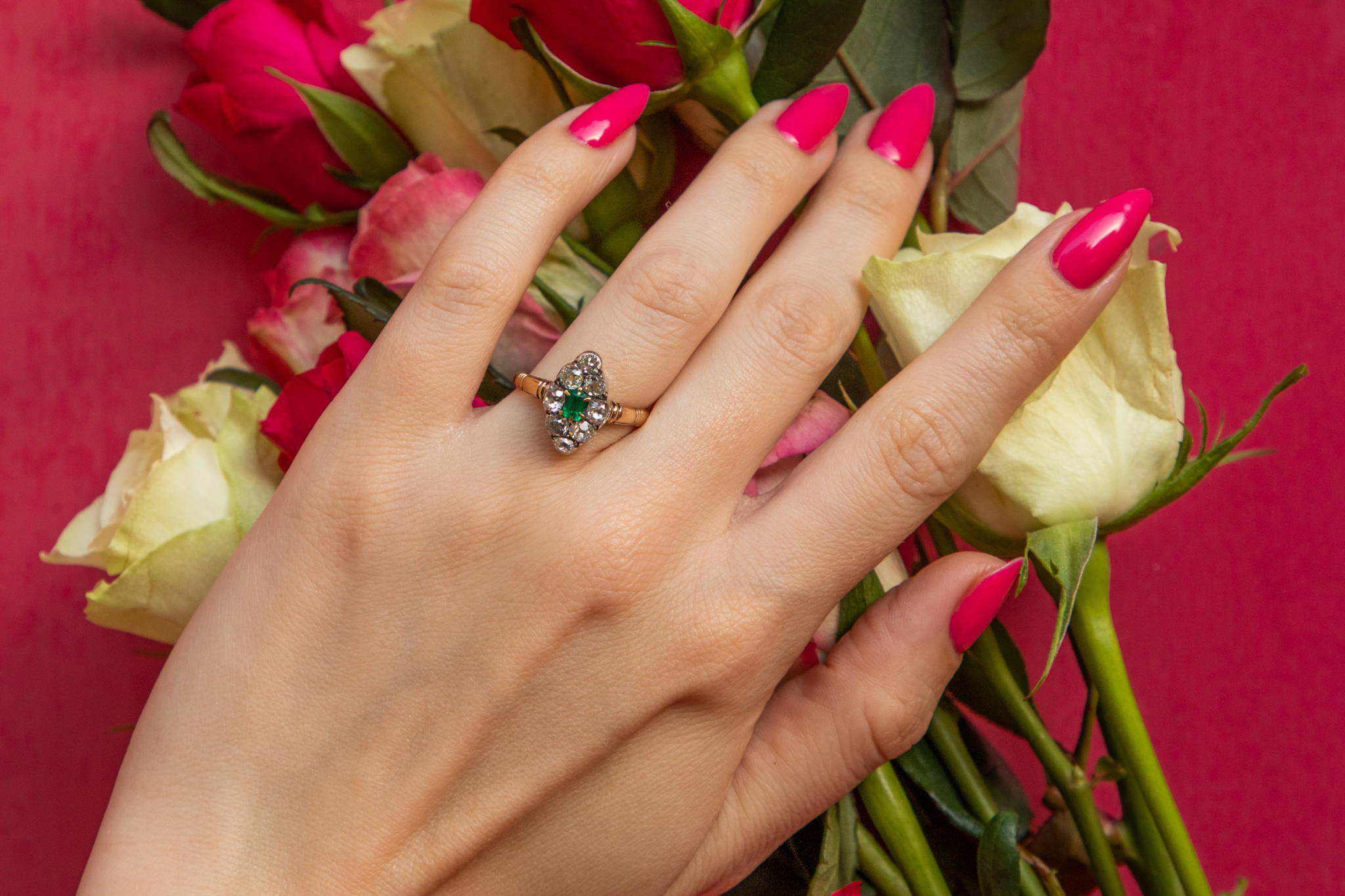 What is the difference between an Old Mine Cut Diamond and Cushion Cut Diamond?

Cushion Cut Diamonds, like Round Brilliants are fashioned to have that “black and white” sparkle that we spoke of earlier. On the other hand, Old Mine Cut Diamonds aren’t cut with this in mind. Originating in the 1750s, these Diamonds didn’t have the glaring artificial lights that we have in our homes. Rather they were designed to maximise their sparkle against natural light and candlelight - how romantic! 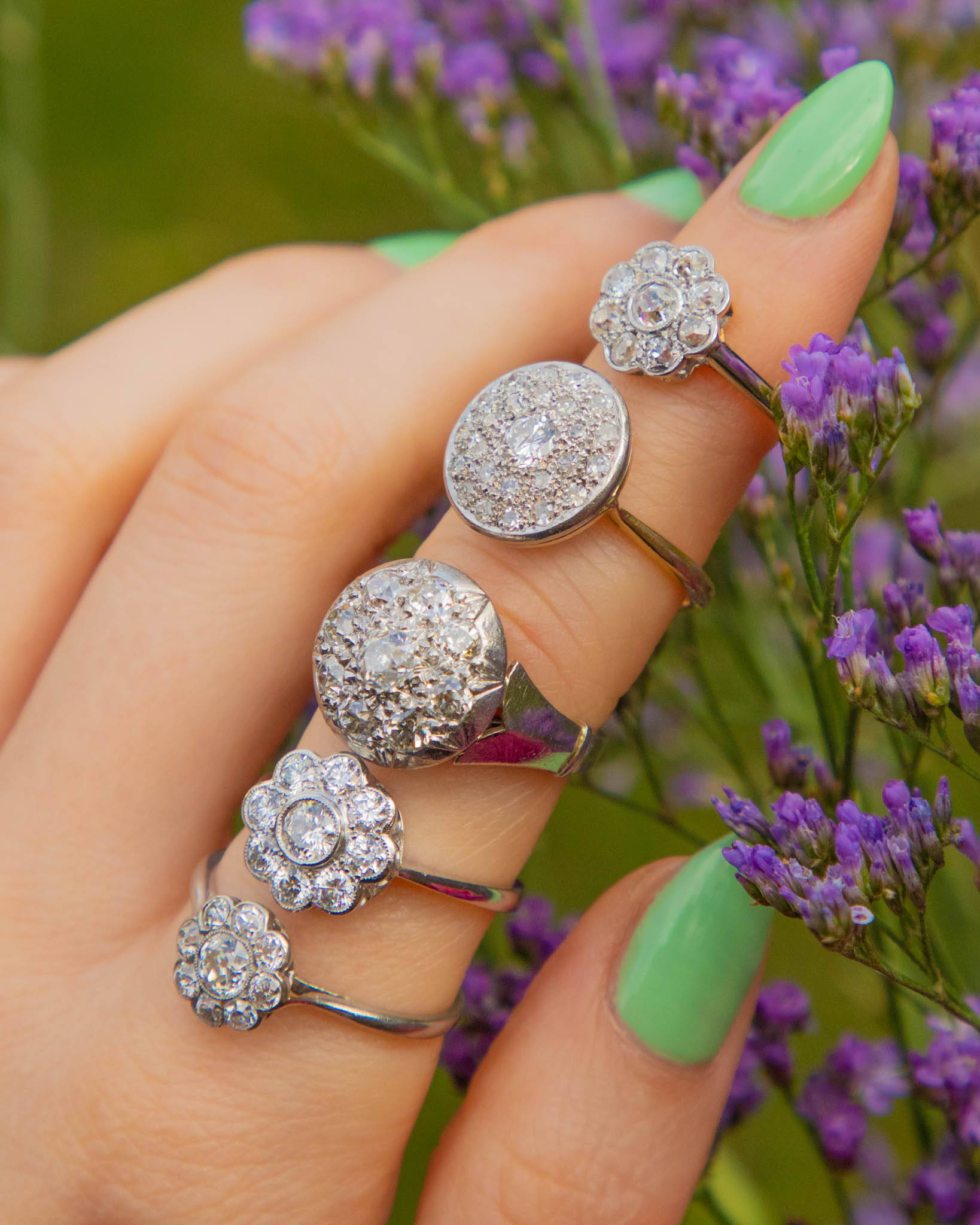 Blogs reccommended for you! 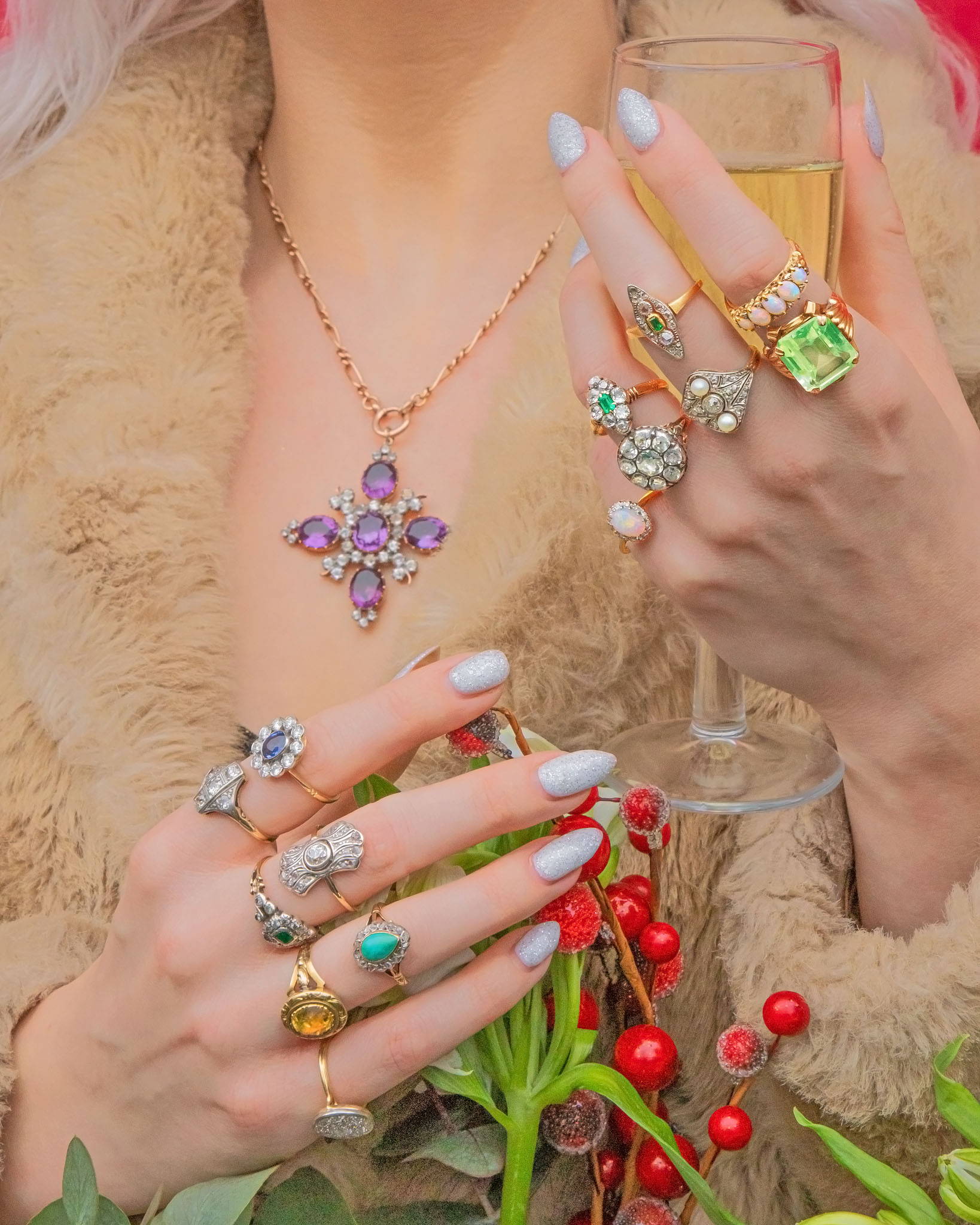 Everything You Want To Know About Cocktail Dress Rings 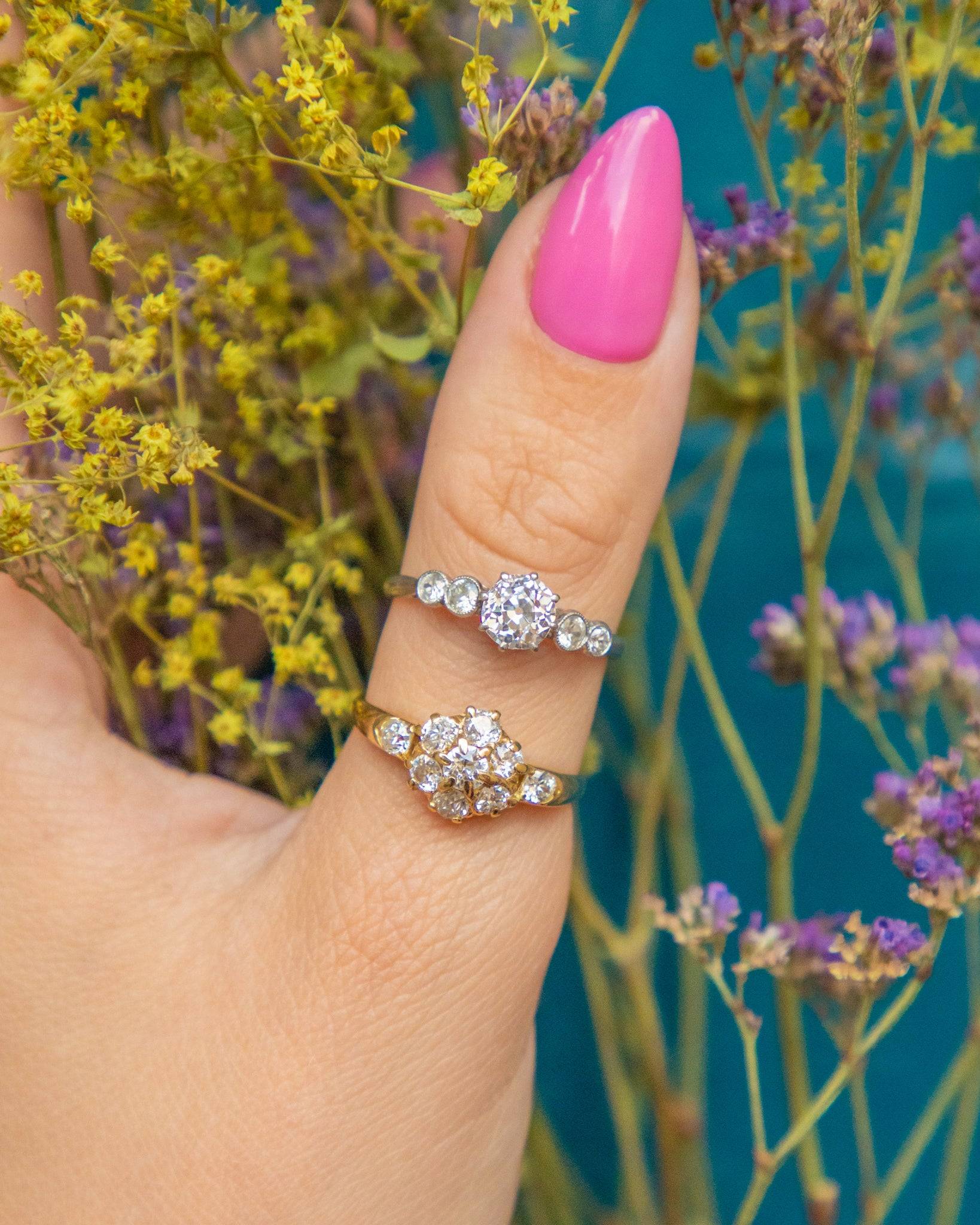 The Meaning of Antique Celestial Jewellery

Another revered and famous Diamond, the Mazarin Cut is an Old Cut Diamond with 17 facets on its crown. Otherwise known as the Double Cut Brilliant, the Mazarin Cut Diamond is just as fancy as its name suggests. It is believed that the mazarin cut was named after Cardinal Mazarin (1601-1661), a man who lived and breathed his extensive Diamond collection. The evolution of this beautiful and chic Diamond cut eventually birthed the Triple Cut and Peruzzi Brilliant Cut. 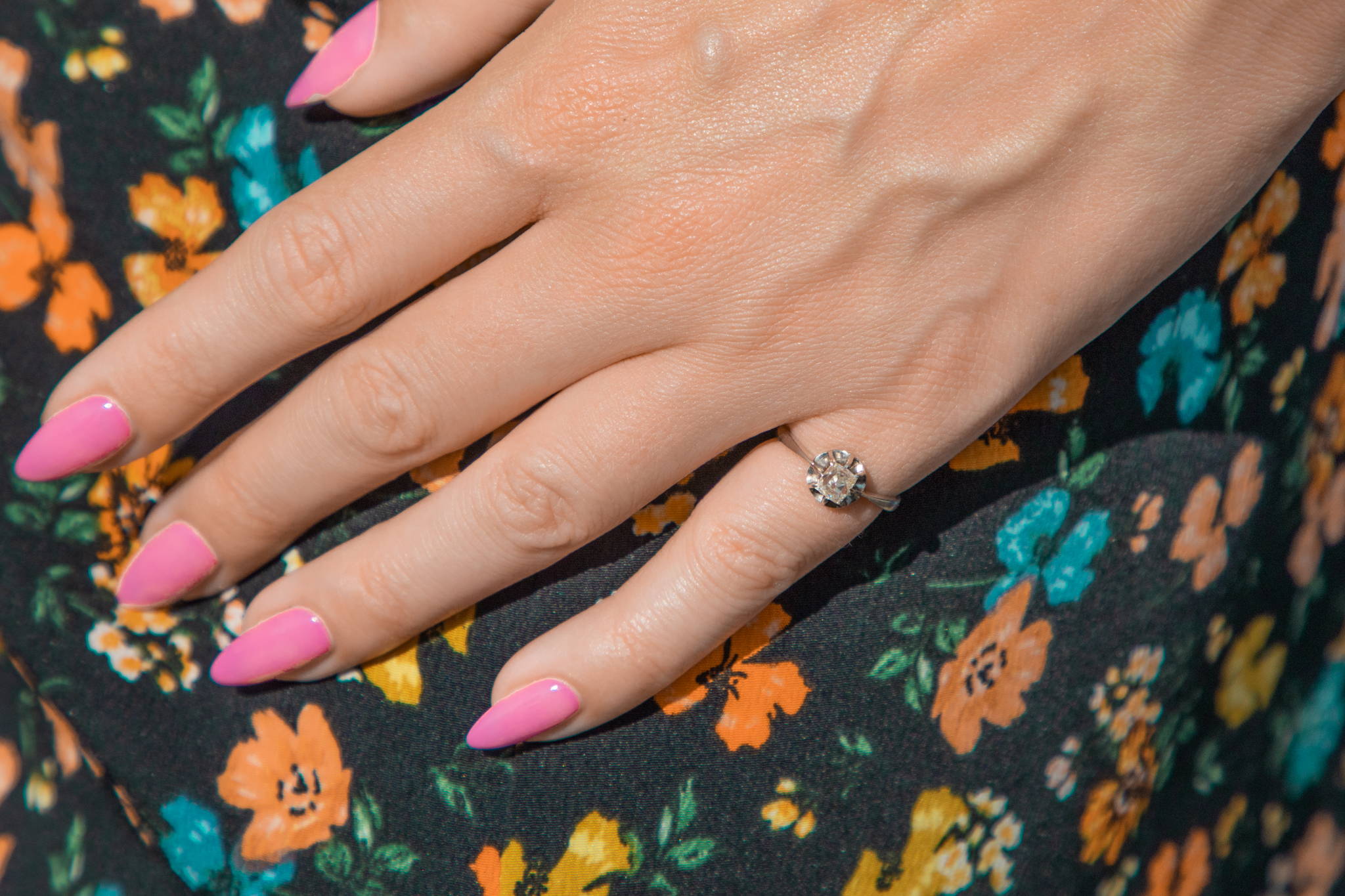 Potentially the oldest style of Old Cut Diamond, Table Cut Diamonds were worn as early as the 13th century. As Diamonds are one of the hardest substances on earth, the technology did not exist to cut and craft these gems into the beautiful creations that we know them to be today. However, the jewellers and Diamond cutters of the 1200s soon learnt a valuable lesson in Diamond cutting. The crystalline structure of Diamonds means that some planes of the Diamond are weaker than others, allowing them to be cut and polished, giving the stones a flattened table facet, the largest of a Diamond and its face when viewed from above. This discovery was likely to have originated in trade routes between India and Europe. Historians think that perhaps this occurred in Venice or the Middle East. By the 15th century, the rotary Diamond wheel, a major invention in the history of Diamond was developed and allowed jewellers to generate more complex faceted gems. It was common practise in history to “re-cut” Diamonds in their lifetime, making Table Cut Diamonds all the more rarer to discover and procure today.

Love this blog? Get the latest sparkly news to your inbox below:

I love the old diamonds. Thank you for sharing this information so I can become better educated on them.