This week the Chelsea Flower Show is back in all its blooming glory, but this year with an autumnal glow. The show, traditionally held during peak British Spring time, is one of the largest horticulture exhibitions in the world. With deep roots in Victorian history, this show has been a plethora of hand-picked, botanical bliss for over a century. 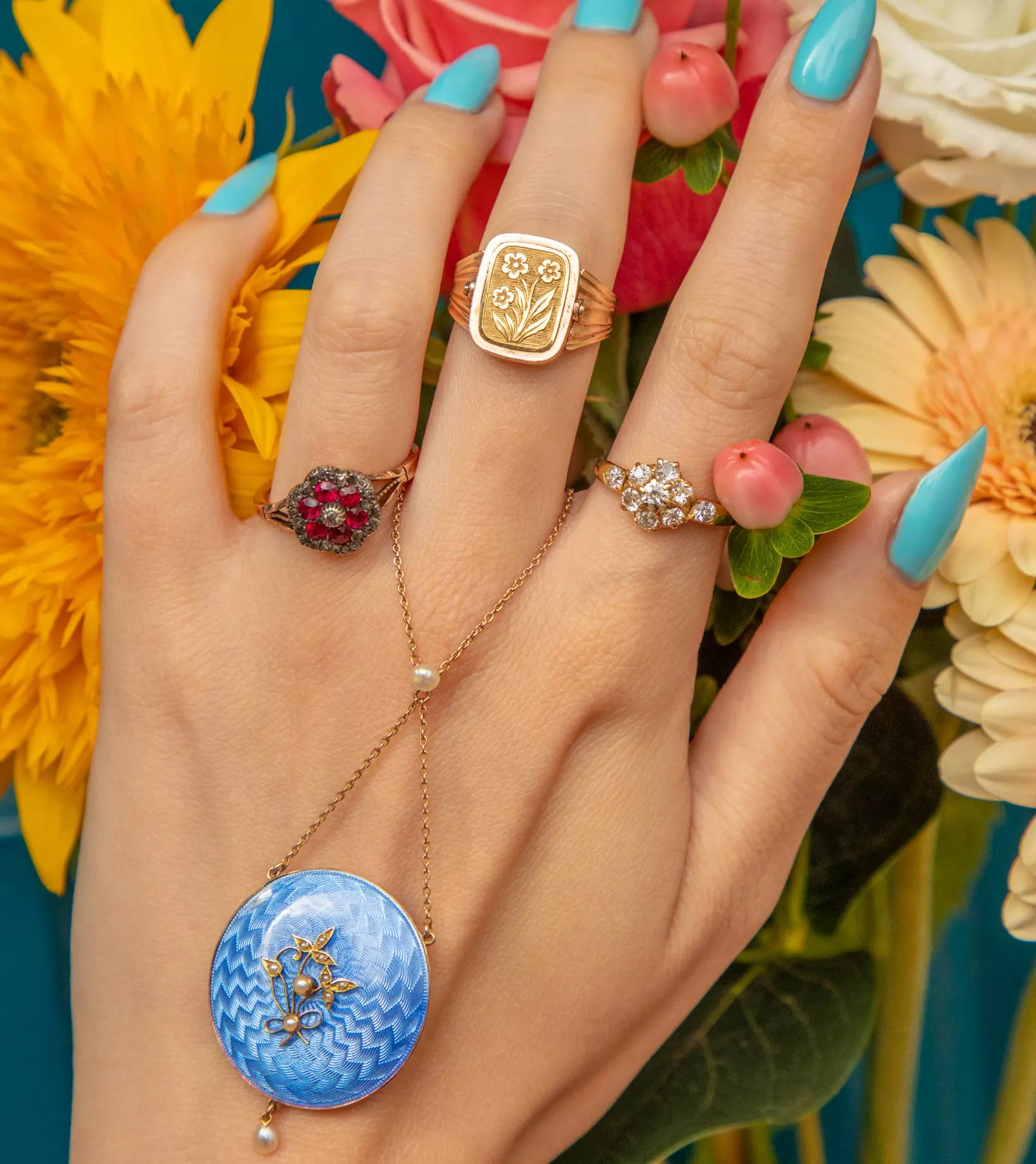 The Chelsea Flower show dates back to 1862, first held at the Royal Horticultural Society in Kensington. It was customary since the early 1830s for the RHS to hold flower shows in Chiswick, but it wasn’t until 1862 that it became an annual society event. The Chelsea Flower Show was originally known as “The Great Spring Show” and was initially comprised of plant and seed merchants selling their latest wares, but by the mid 1880s it had grown to become a pinnacle in English horticulture and society. In 1888, the show moved to Temple Gardens, a place historically known for its bounteous blooming roses.

It wasn’t until the Post-Edwardian era in 1912 where the show moved to the Royal Hospital in Chelsea, and it has remained there ever since - over 110 years! A steadfast and comforting presence against social and political uncertainty, the Chelsea Flower Show provided an antidote against two World Wars and even, more recently, the Covid-19 pandemic. For the past 50 years, the Chelsea Flower Show has attracted over 157,000 visitors each year and has been covered religiously by the BBC. For the horticultural world, it is momentous - known for its avant-garde floral creations, finessed garden design, rare floral seeds and more.

Notably for the British and international public, the show was an act of resilience, symbolic that life and nature goes on even when times are tough. This has been most recently echoed with the Covid-19 pandemic where the show moved digital for the first time in 2020, and then moved to the week of the 20th of September 2021. After the first world war I and second world war, the show resumed with a raucous success, with famous Chelsea tea parties of the roaring twenties and the triumphant 1953 Queen Elizabeth’s coronation. So, we can only imagine what wonderful events will occur with the flower show's return this year!

As a nod to its Victorian history and international cultural relevance, we have curated a beautiful collection of antique floral jewellery, as well as detailing the most popular Victorian flowers present within Victorian jewellery. Not only will this enrich your understanding of antique jewels, but it instantly connects you to a quintessentially British event. 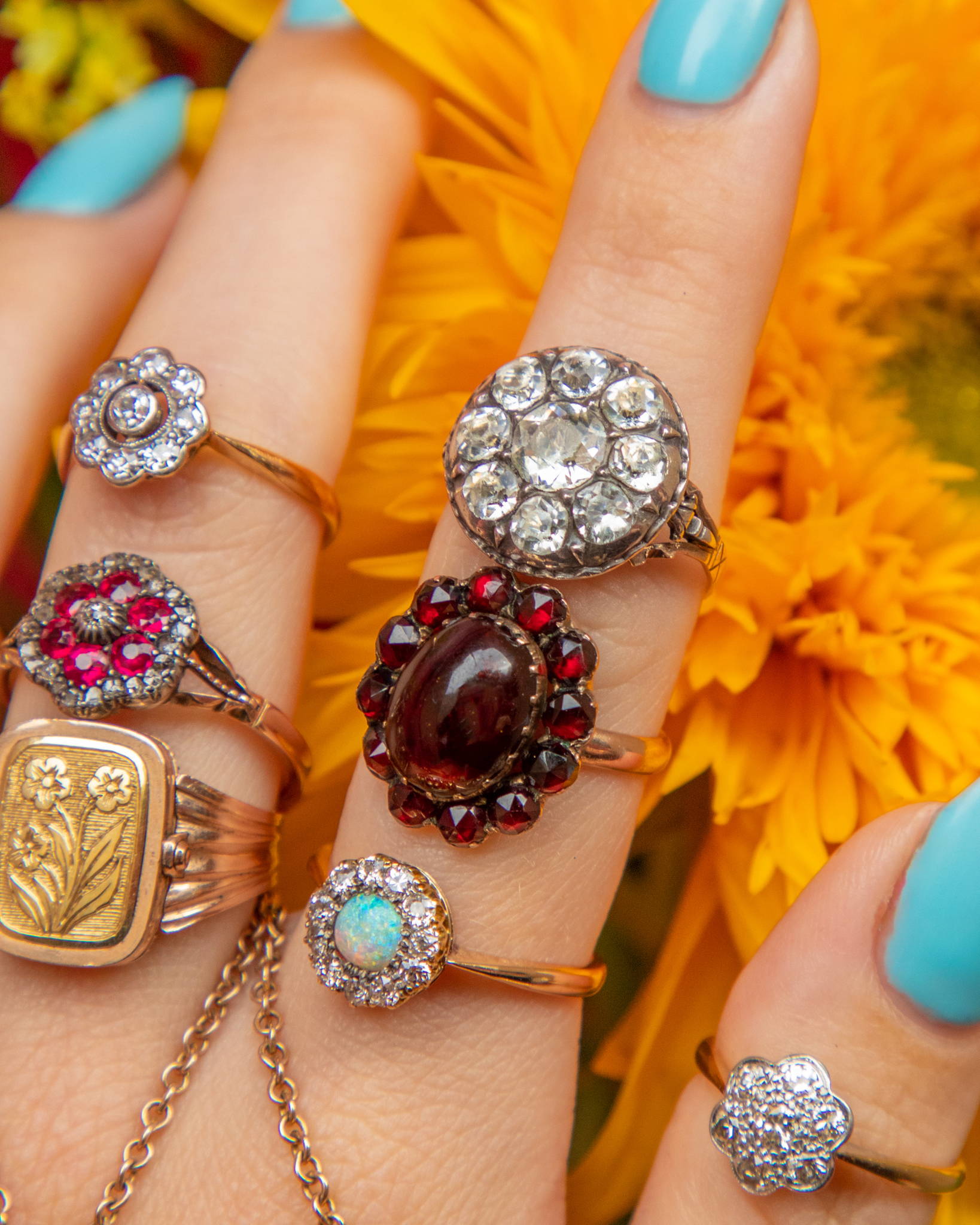 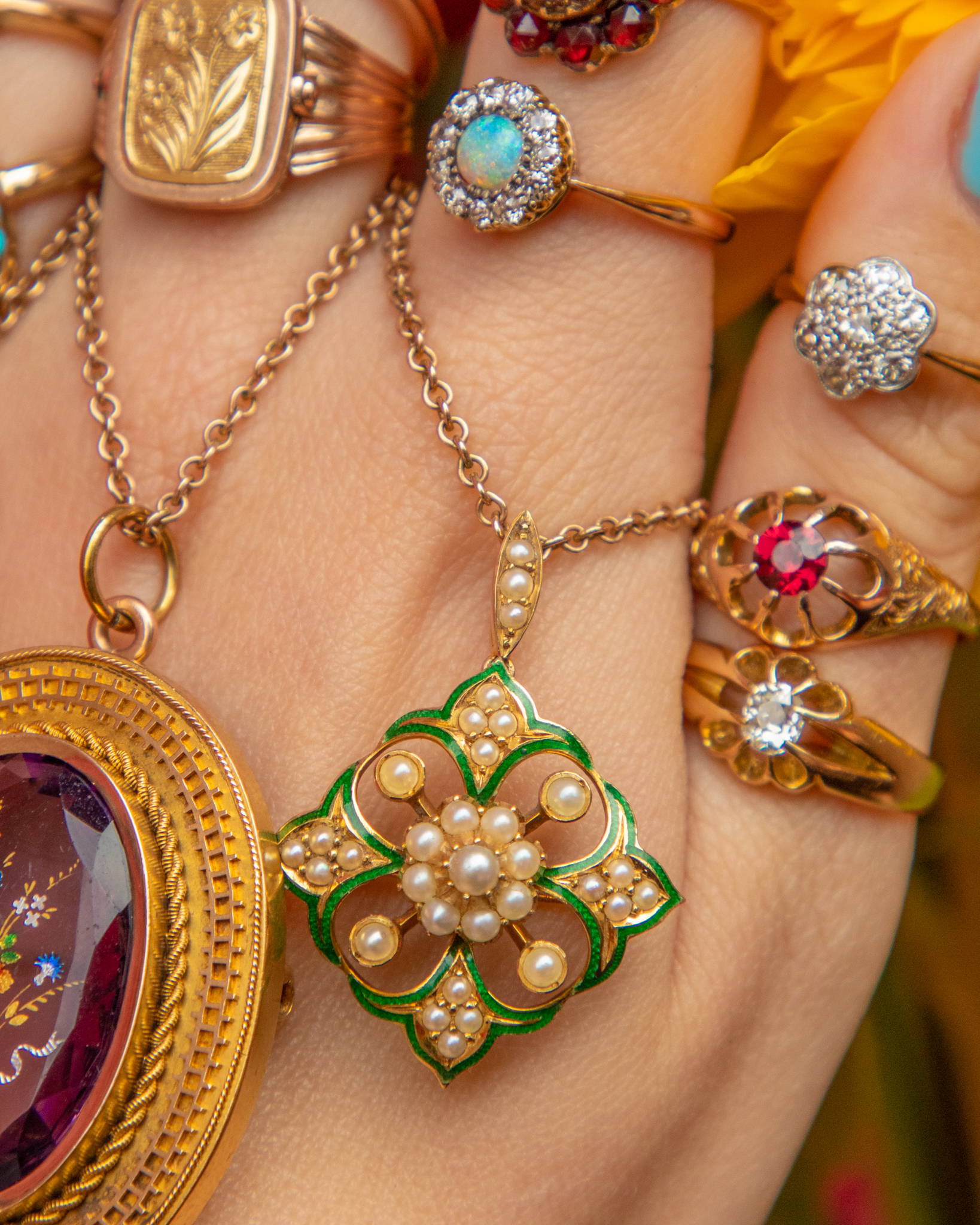 Whilst our Victorian flower language guide illustrates the variety of common floral symbols and their meanings, you also need to know which flowers were the most potent.

If you love collecting Victorian lockets, then you will definitely have come across a variety of forget me not engravings. Often accompanied by acanthus leaves, forget me nots were prolific in Victorian jewellery. The history of the forget me not is just as beguiling as the flower itself, steeped within Germanic fables and Biblical stories. This sweet blue flower is symbolic of remembrance, faithfulness and commitment, perfect for when your beloved is far away at sea, travelling the world or if your beloved has even passed away. The Victorians adored this sentimental flower, not only because it was rich in symbolism but relatively easy to depict. It’s petite stature and five-petal blossom could easily be outlined, and it could be painted in bright blue enamel too. Forget me nots were common place in Victorian love tokens and mourning jewellery.

Whilst more prevalent in Art Deco era jewellery, Orange Blossoms symbolism dates back to the 19th century. In 1839, Prince Albert sent a Gold and Porcelain Orange Blossom brooch to the future Queen Victoria and for their wedding Queen Victoria allegedly wore a crown of real orange blossoms. Traditionally, orange blossoms were considered to be an aphrodisiac because of their potent floral and zesty perfume. This is why the flower was a popular choice for Victorian and Edwardian brides to be, whether incorporated into their dress, bouquets or hand wreaths. In jewellery, orange blossom engravings were popular on wedding bands, symbolising purity, chastity and innocence - three virtues that were highly prized amongst Victorian brides. 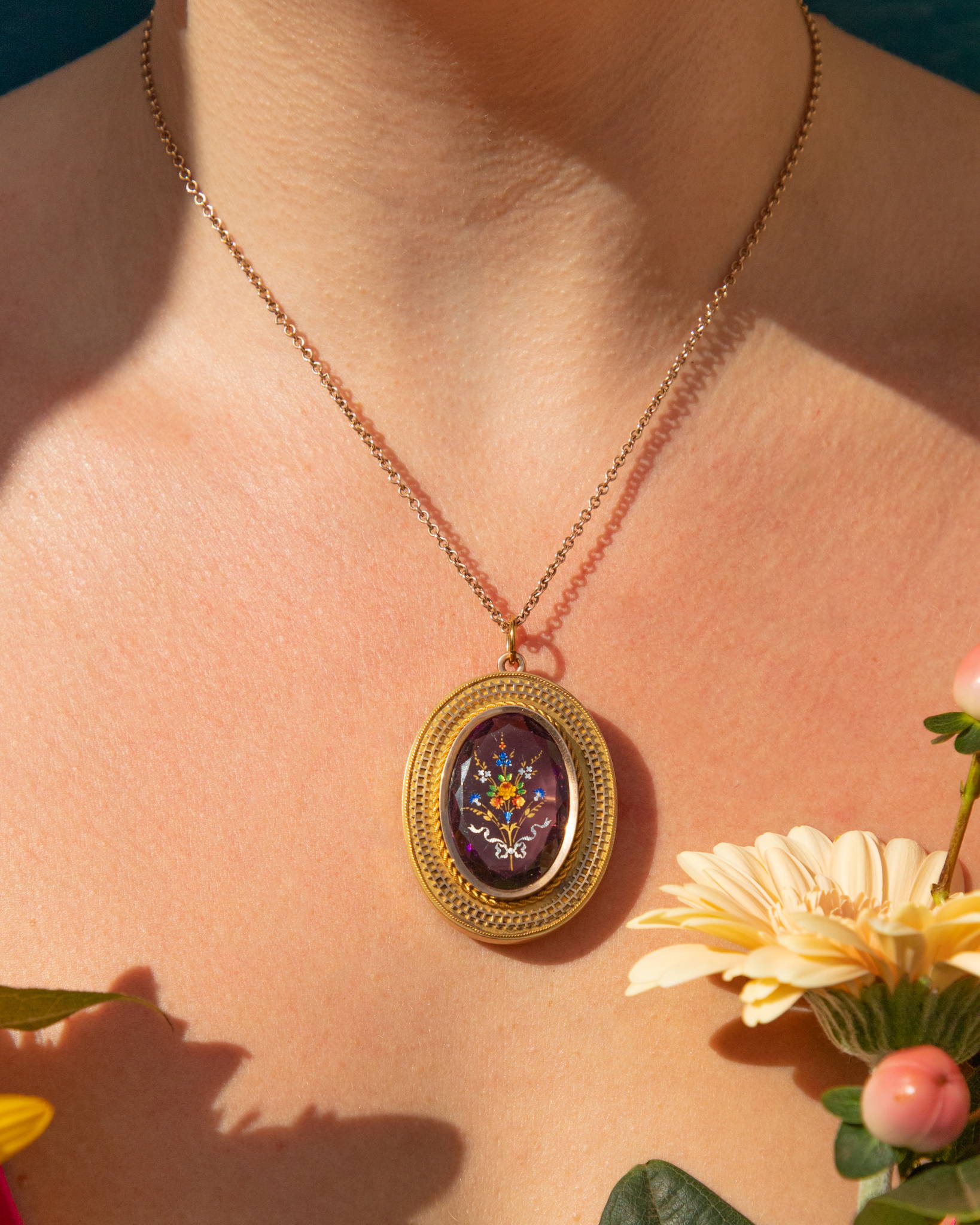 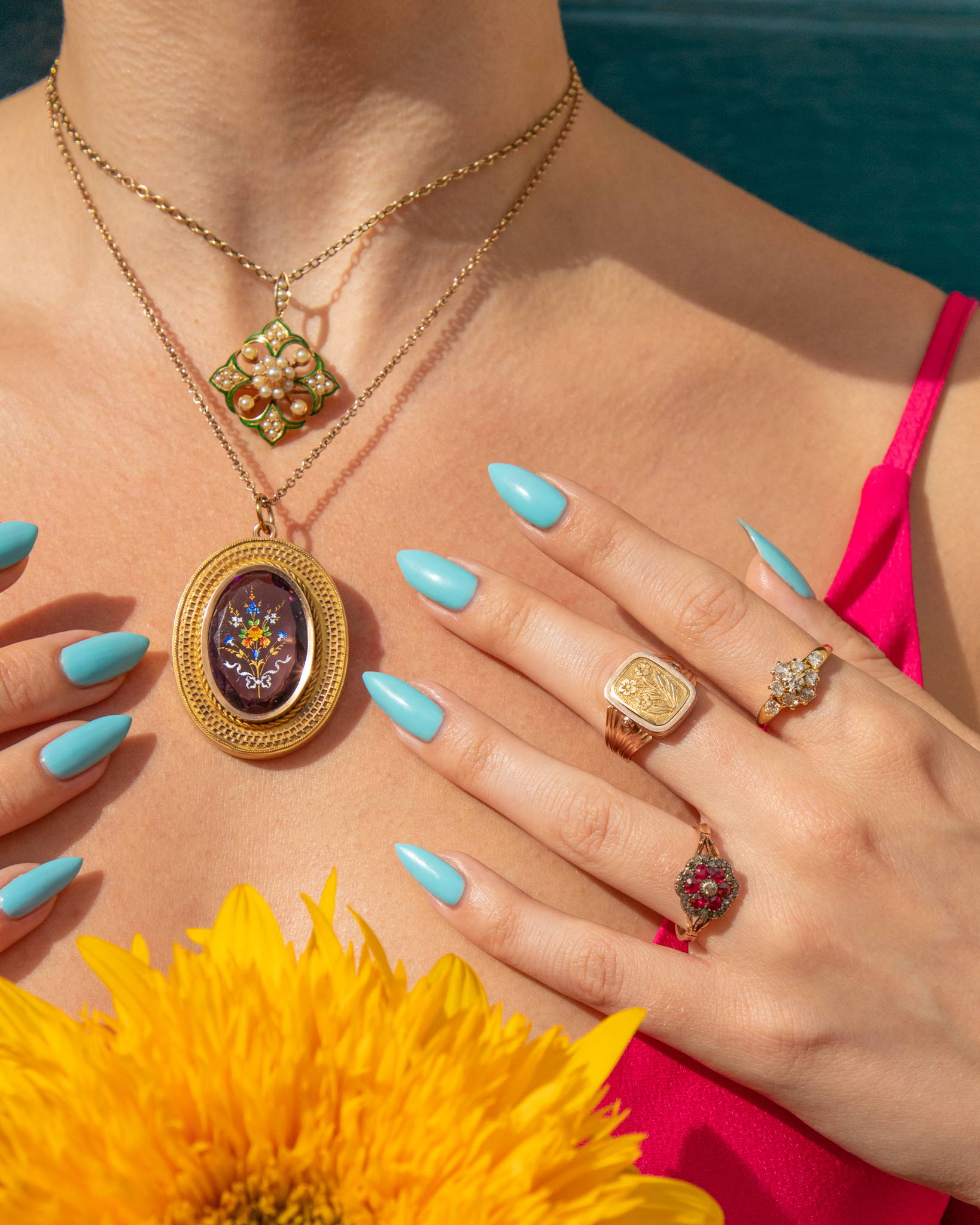 The national flower of Scotland, Thistles were a fashionable floriography symbol in the Victorian period. It is no secret that Queen Victoria LOVED Scottish Agate jewellery, and thistles were the perfect added flourish. Thistles have accrued a myriad of meanings since the dawn of time, from protection to pride. In French lore, thistles are protective flowers against witches, a flower sent down from the sun to protect the land against evil. Whilst we cannot be sure if the Victorians believed this too, they were certainly attracted towards this striking bright purple flower.

Pansies and Violas are two stunning flowers from the same family, with both being incredibly popular amongst Georgian, Victorian and Art Nouveau jewellery. In the Victorian language of flowers, these two florals may look similar but they do have different meanings. Pansy comes from the 15th century French word “pensee” which means “to think”. Meaning that it quickly became a flower of secret courtship. A woman wearing a Pansy pendant was symbolised secret amorous thoughts towards another.

On the other hand, Violas are symbols of innocence, modesty and decency. The white corolla in the centre of the flower evokes happiness and is the expression of a budding first love. Purple Violas are nostalgic flowers for a passing love - the ultimate post break up flower.

Antique Pansy and Viola jewellery is one of the most widely collected jewels. This is because they were often an example of fine enamel work and studded with singular Diamonds or Pearls.

One of the most commonly used foliage ornaments in history, Acanthus leaves have adorned Roman columns, Tudor portraits and even the classic red British post boxes. Naturally, it graced its way across Victorian jewellery too. Symbolic of immortality and resurrection, acanthus leaves can be interpreted as a profession of eternal love.

In a Victorian jewel, if there isn’t an acanthus leave on display, then you will certainly be able to spot an ivy leaf or two! Native to England, ivy leaves are one of many traditional English plants that jewellers could take inspiration from. Similarly to Acanthus leaves, Ivy leaves are symbols of immortality, but they are also classic symbols of fidelity too. This is because, Ivy leave tendrils are known to easily “cling” onto each other!

Steeped in symbolism, roses are one of the UK’s favourite flowers and their popularity dates back to the Victorian era. The symbolism of roses can vary depending upon their colour, with red roses symbolising passion and romance and peach roses meaning gratitude. In the Victorian language of flowers, rose meanings can vary depending on their arrangement, however, just like other flowers, they are common Victorian jewellery symbols of beauty, love, adoration and passion. We commonly see pink roses displayed in Art Nouveau enamelled lockets or in pietra dura pieces, these are symbols of admiration and gratitude. 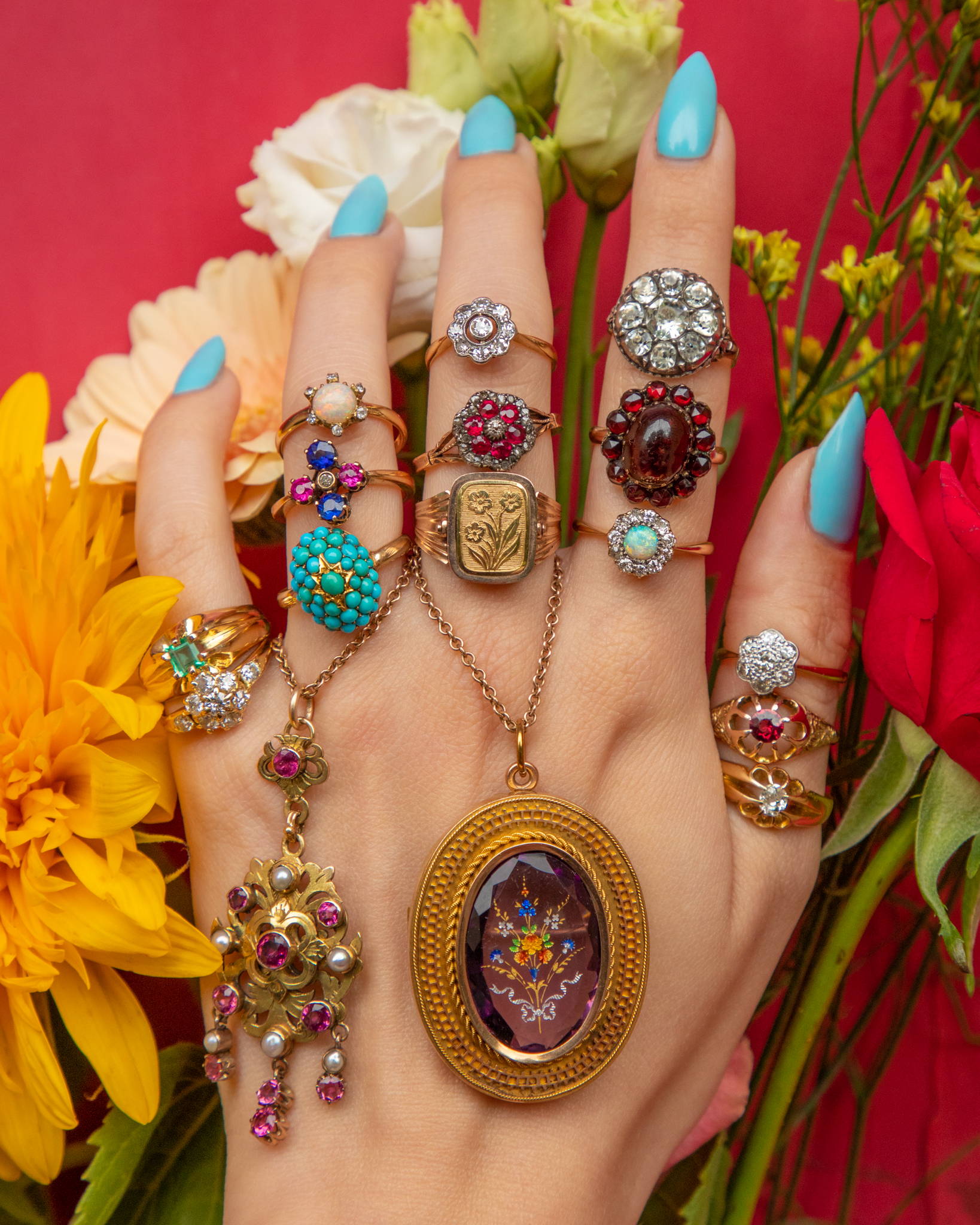 We hope you have enjoyed this wonderful collection! If you have visited the Chelsea Flower Show, why not share your photos with us? Tag us on instagram @Lillicoco or send them to us via a DM, we would love to see your floral adventures!