History of the Engagement Ring

A stunning engagement ring glistening in the light is a beautiful symbol of a couple’s love for one another and their intention of becoming husband and wife. This captivating symbol of love has a fascinating history, which I want to explore in this blog post.

Let’s start at the beginning... It is believed that the tradition of engagement rings dates as far back as the ancient Egyptian era, around 3100 – 2686 B.C. when couples supposedly exchanged rings made from braided reeds.

Much as it is today, the ancient Egyptians’ braided reed rings were thought of as symbols of eternity. This ancient civilisation wore their symbols of devotion on the left-hand ring finger where it was believed a vein ran directly to the heart, just as we do today!

A Tradition Continued by the Romans The art of giving a ringed emblem as a sign of eternity is believed to have continued into Ancient Rome. Rather than being braided reed rings, Romans started to give their brides gold rings in lieu of giving them money or an item of value. It was during Roman times that detailed legal requirements for engagements, weddings and divorces were first enacted. Pre-marital rings in ancient Rome acted as a mark of financial security given by a man to his soon-to-be bride.

The law was abolished in the United States in 1935 when changing social attitudes led to many jurisdictions feeling increasingly reluctant to interfere in personal relationships that did not involve domestic violence or child welfare.

It wasn’t until 1970 when the breach of contract law in England was eradicated. Before this point, a woman could sue a man if he broke off their engagement. Conversely, a woman was allowed to change her mind without being subjected to any penalty. In the second century B.C, a Roman man’s bride-to-be was presented with two rings, one of which she wore in public and was made from gold and the other made of iron, which she wore in the home when conducting household chores. This seemingly strange custom for women to wear two engagement rings, one made of gold and the other of iron, continued for several centuries.

The Arrival of the Diamond Engagement Ring

The first diamond engagement rings didn’t surface until the 1400s, with the first record of a diamond engagement ring dating to 1477 when the Archduke Maximilian of Austria is believed to have proposed to Mary of Burgundy. The ring was made from flat pieces of diamonds, very thoughtfully spelling out her first initial, ‘M’ in a glittering script of sparkles. This lavish show of love and devotion evoked a trend for affluent nobles in Europe to shower their loved ones with luxury diamond engagement rings as a symbol of their love and commitment. It’s not uncommon for couples about to tie the knot to have engagement rings engraved with their initials, names or a personal message that means something to their relationship.

This trend is believed to have begun in the 15th century and to have continued to the 17th century, particularly in the United Kingdom and France. Dubbed as a ‘posie ring’, these rings were typically made from gold and had a short inscription on their surface. The inscriptions were typically written in Norman, French, English or Latin and were often quotes from contemporary courtship stories.

During the Middle Ages, it was also common for figures of saints or religious text to be inscribed on engagement rings alongside romantic messages, signifying that such rings functioned as both a religious talisman and a symbol of love. Both the Victorian and Edwardian eras followed the now well-established trend of proposing to loved ones with lavishly-embezzled engagement rings. Following his mother’s liking for fashion and lavishness, King Edward VII’s rule was brimming with fashion, luxury and splendour, with the Edwardian era gaining the name “Belle Epoque” - the “Beautiful Era”. Engagement rings during the “Belle Epoque” era were light, delicate and decorative and were often made using millegrain settings, whereby small portions of platinum were manipulated to create delicate borders with the appearance of tiny beads or crimped edges.

How much do Men Spend on Engagement Rings?

Being an expression of their love and commitment, men have long been willing to go the ‘extra mile’ and splash out on an extravagant, eye-catching engagement ring for the love of their life. 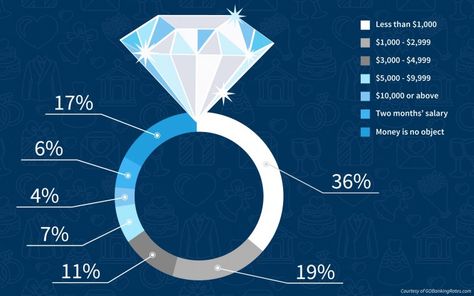 Research shows that spending on engagement rings doubled in 2018 with the average spend on a ring standing at £1,483. The study also revealed that engagement rings remain a key feature of a proposal, with 11.3% of the research participants saying they would turn down their partner’s offer of marriage if the proposal wasn’t perfect. (Crikey!)

A traditional proposal may not be right for everyone but we can all agree that as an expression of love, it doesn't get much better than a big Diamond ring!

If you'd like to see a selection of antique and vintage rings from across the different eras of jewellery history then why not take a look at our collection of engagement rings here?