Beautiful and the Damned: The Macabre History of Mourning Jewellery

Spooky season is here! (Did you see our Pumpkin Spice shoot?!) Depending on your disposition, Victorian mourning jewellery might be a trick or treat, but we’re very much in the latter camp – not only this month, but always. Portable curiosities, mourning jewellery combines the magnificent and the macabre. From the moody gloss of carved Whitby Jet jewellery, to the precision plaits protected under glass in Victorian hair jewelry, there’s something for everyone, whether you’re just a bit of a romantic, a fully-fledged goth, or anything in between.

Let’s find out more about this fabulous, fascinating and freaky kind of antique jewellery! 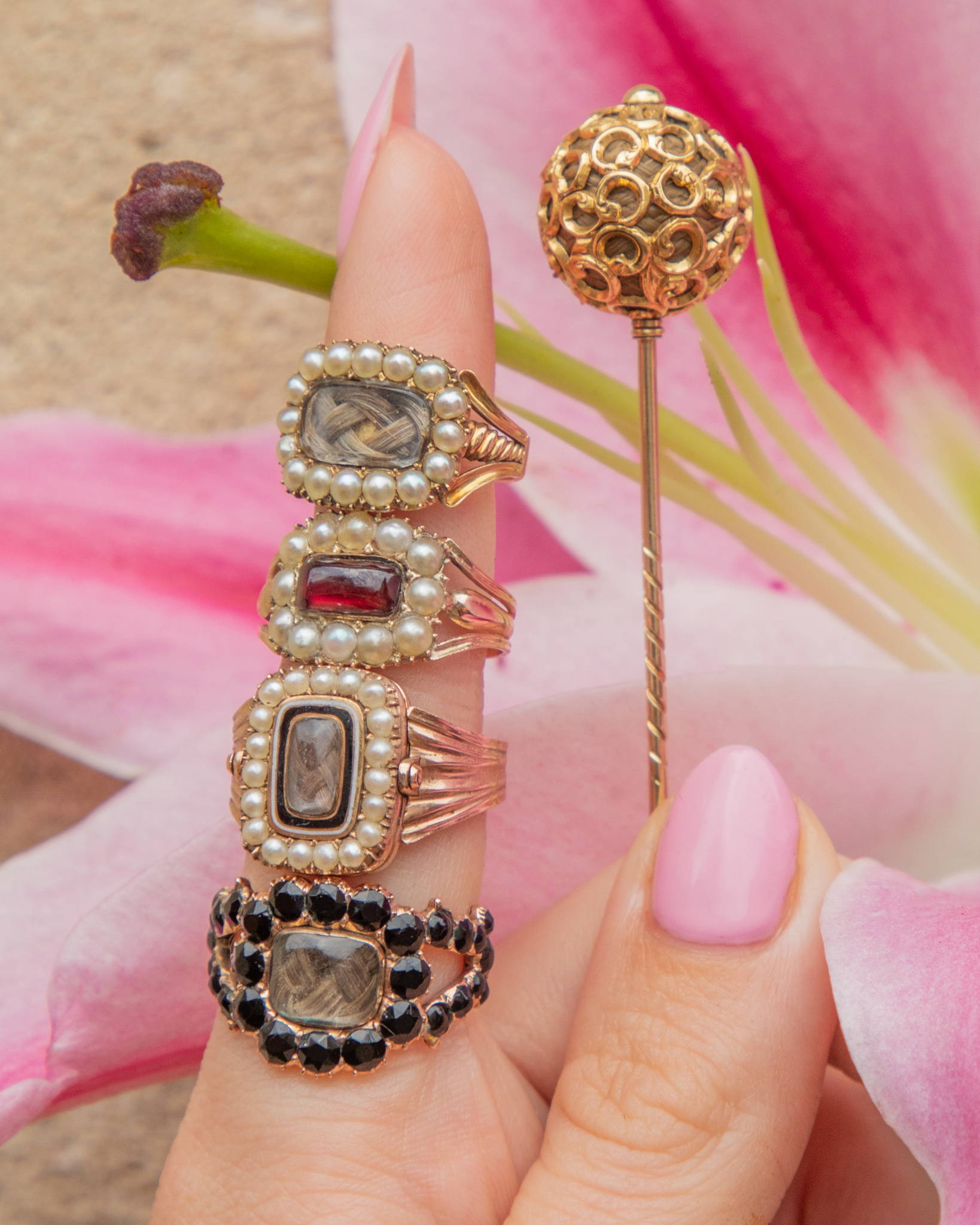 Synonymous with mourning pieces, human and horse hair jewellery meant lost loved ones were remembered by a lock crafted into a precious piece. These types of hair jewellery could take many forms: woven plaits were laid onto the faces of rings or snuggled within "Ouroboros" brooches, or threaded into the reverse of a Victorian mourning pendant or locket. In fact, thicker ropes of hair were even transformed into necklaces, with the locks themselves forming the basis of chain. These jewels could make you shudder with unease or delight, but to the Georgians and Victorians they were part and parcel with their mourning traditions. 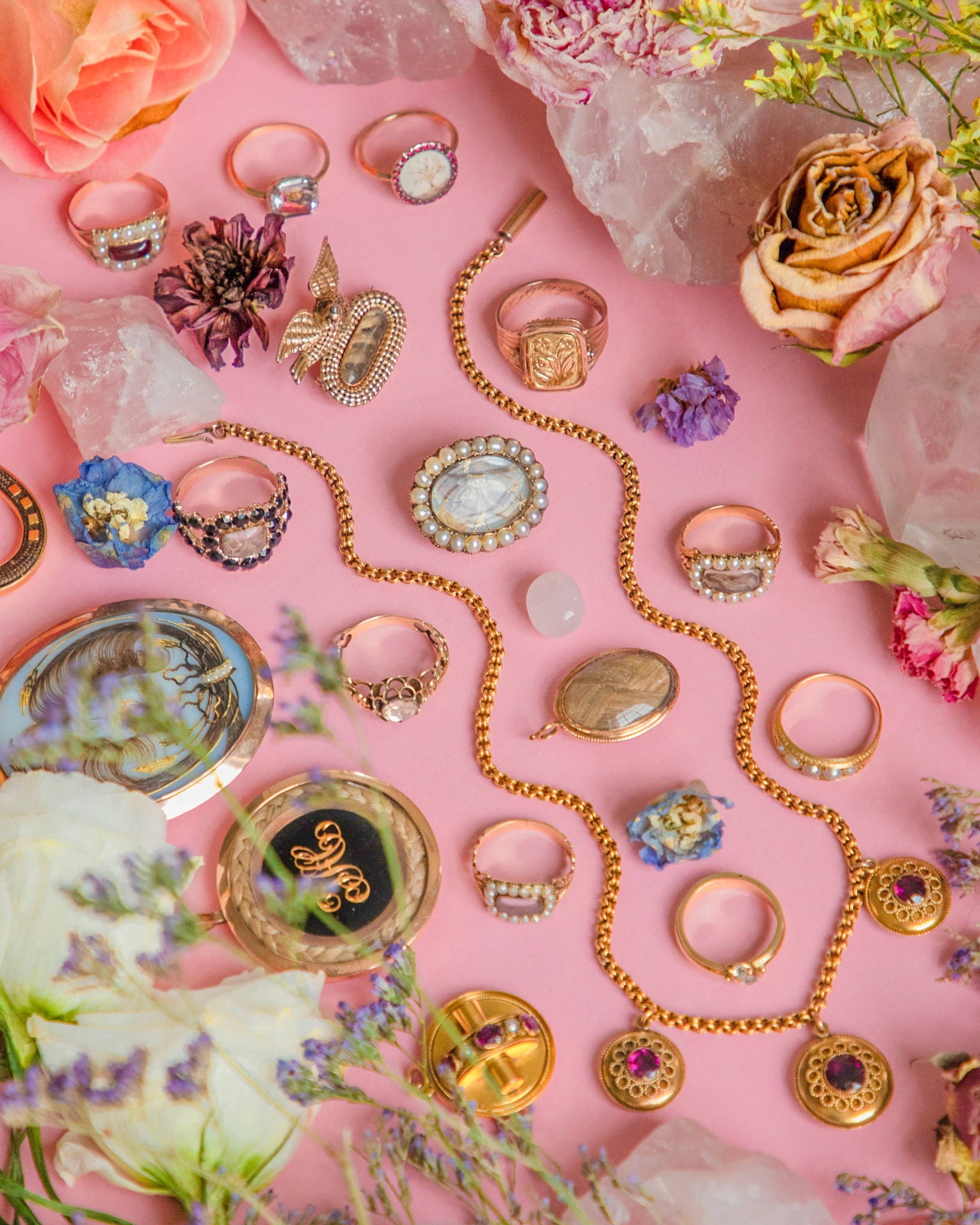 Whilst mourning jewellery was very popular during the 18th and early 19th century, these gloomy creations took on a new lease of life in the Victorian era (pardon the pun!). Queen Victoria was most famed for her extended mourning period when her husband Prince Albert died in 1861, turning melancholia into treasure that extends beyond the Victorian era and tresses. As a result, it was not only super fashionable to covet these curious creatures with every outfit, but you could always take a piece of your beloved with you wherever you go. 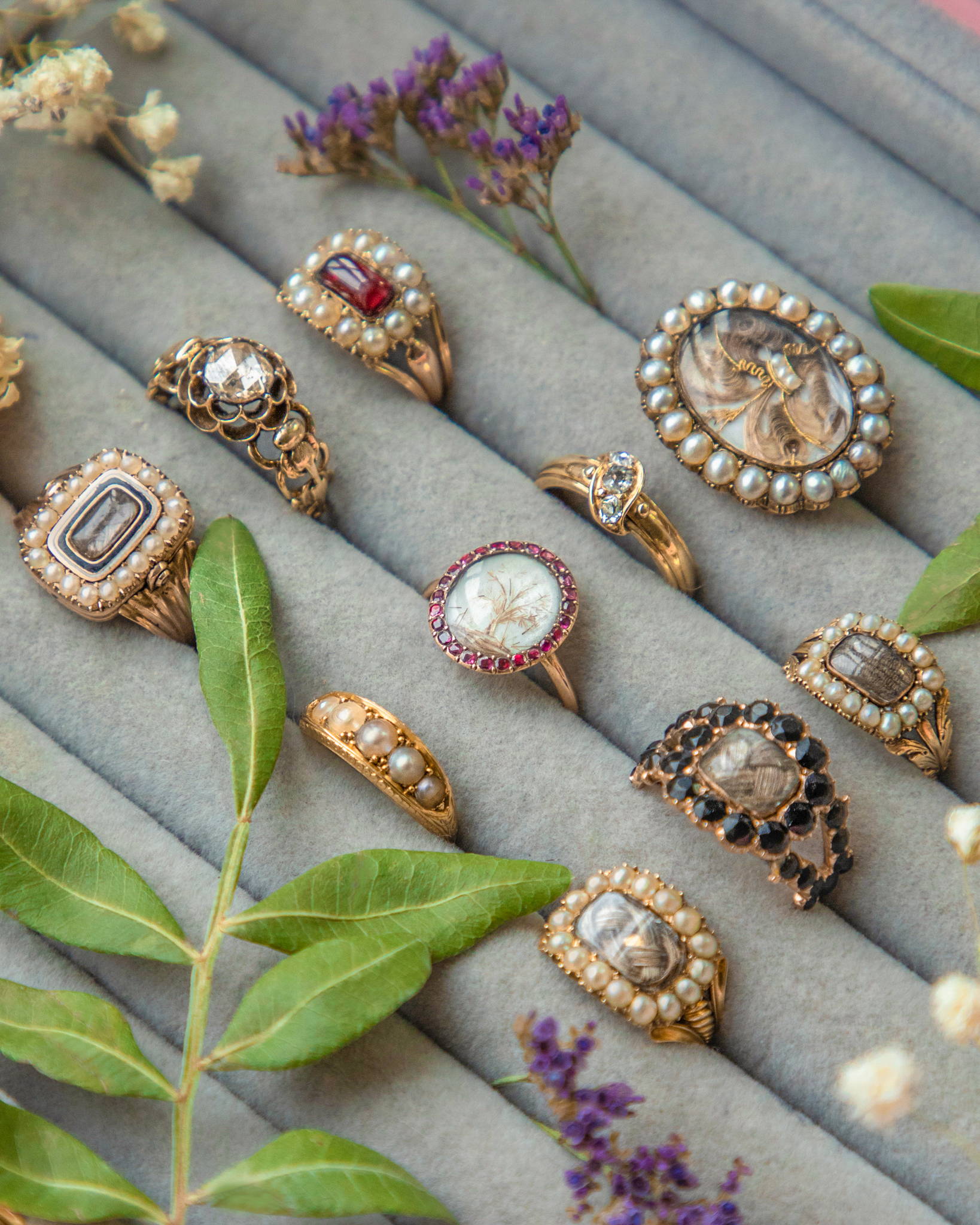 What is a Mourning Ring?

Mourning rings have long been popular oddities, with examples still surviving from the Tudor period. You may be thinking: “what does a mourning ring look like?” Common motifs include skulls, personalised initials and even in some (darkly humorous) cases, engraved worms! Our collection boasts some of the finest Georgian and Victorian mourning jewellery we have ever found, including black enamel mourning rings and even Georgian swivel flip rings. Hair could be displayed at the front or at the back of the band, with deeply etched inscriptions or cyphers naming the person who has passed or using a common term of phrase like “In Memoriam”. However, despite the private subject matter, some mourning rings weren’t as purely personal as they initially seem. When a royal family member died, the entire nation would wear mourning rings to show allegiance to the crown. Whilst this certainly was the case with the death of Prince Albert, Stuart Crystal rings were also a type of 17th and 18th century antique Rock Crystal jewellery to show support of the executed Charles I. 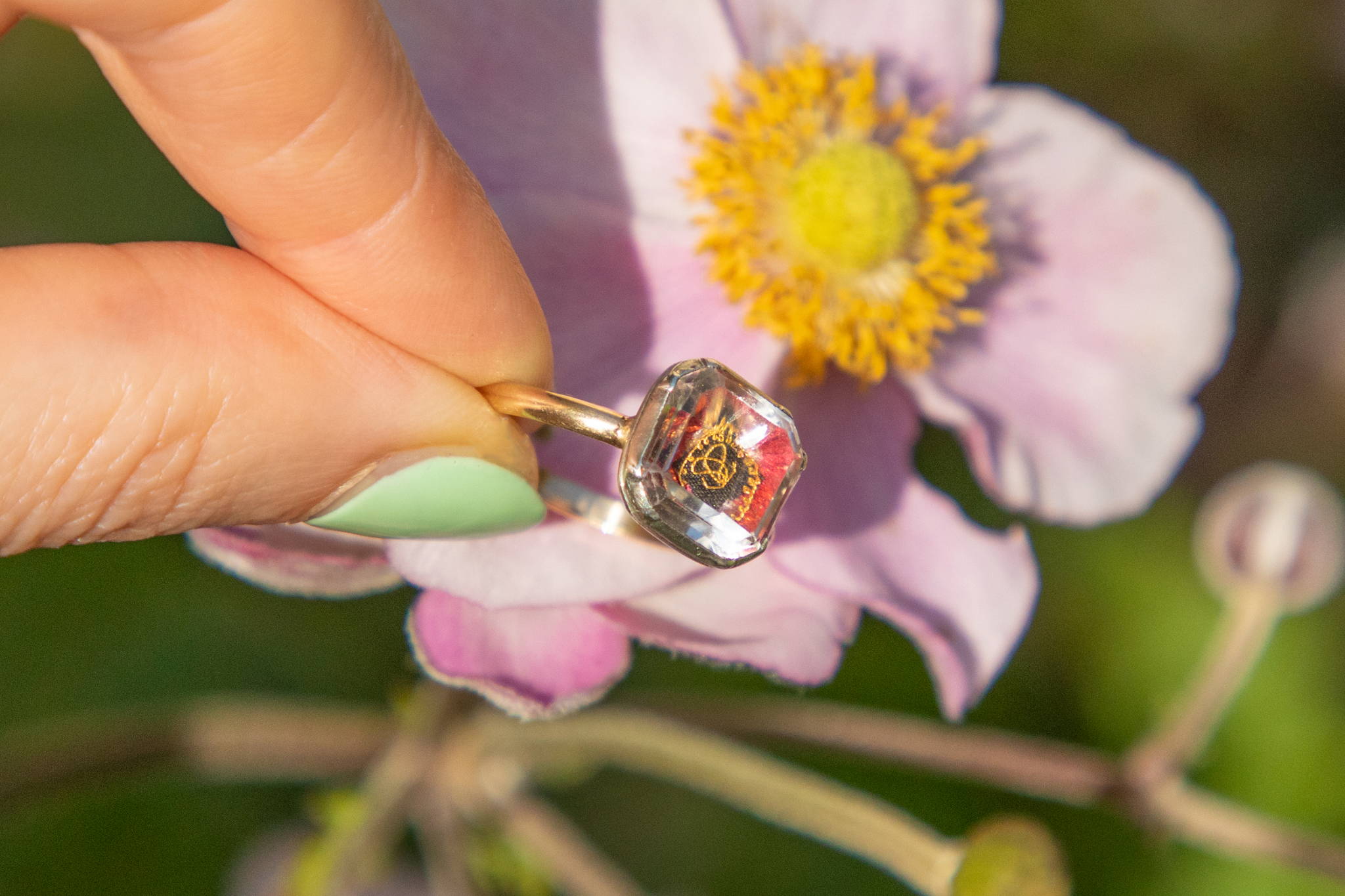 By the time the Georgian and Victorian eras rolled around, it was commonplace practice for the higher classes to leave behind the budget to have memorial keepsake jewellery created after their passing. Dished out after funerals, the tokens often took shape in the form of memorial rings or belt buckles to be worn daily, to remind the wearer of the fleeting nature of life and of course, the love they lost. 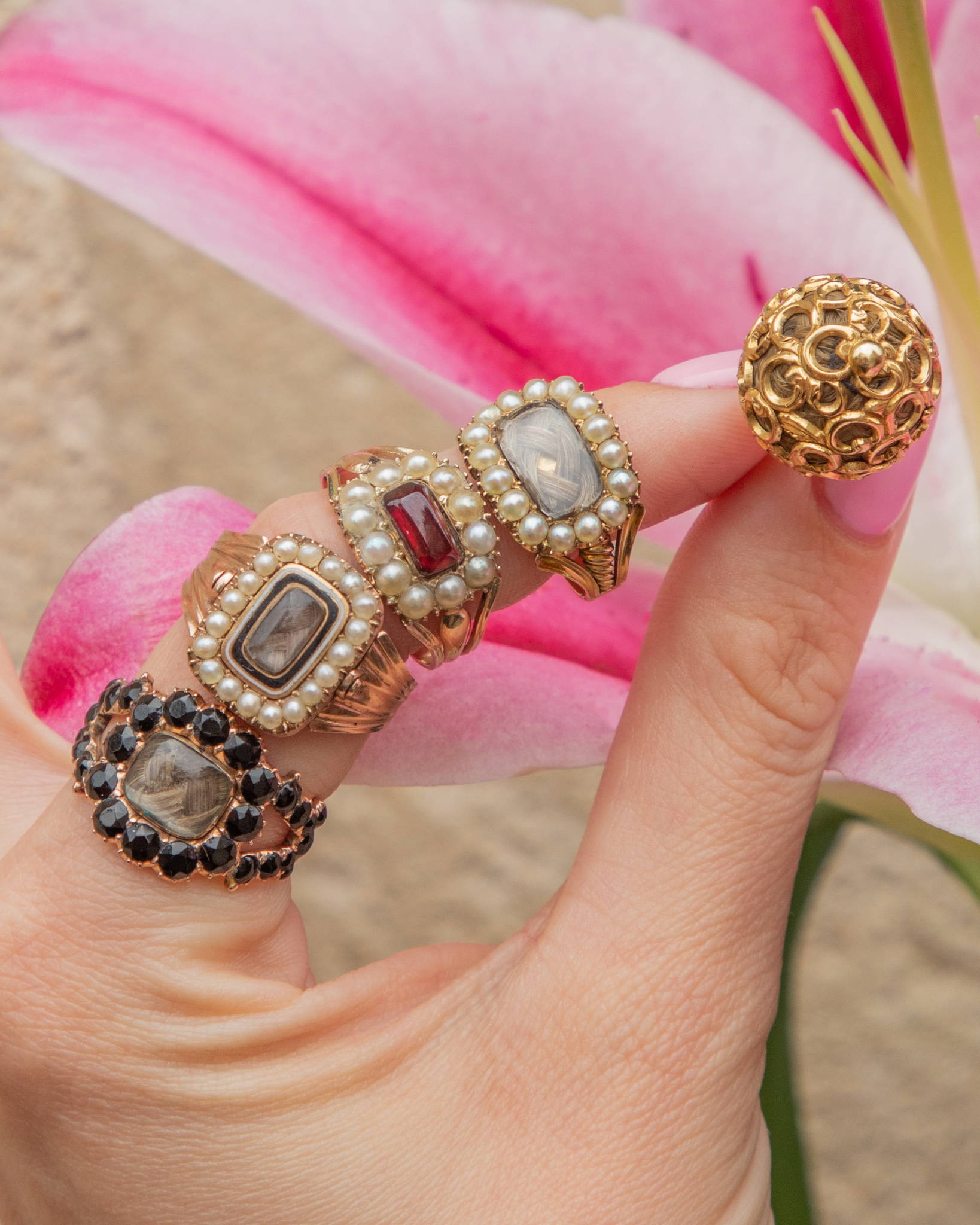 A typical Georgian mourning ring might include gothic lettering on black Jet or urns and willows as symbols of death. The Georgian era’s favoured styles set the trends for the Victorian mourning jewelry that would follow. Their dedication to the art of celebrating the dead even led Georgians to the painstaking fashion of forming tiny pictures from trimmed hair, often creating “Trees of Life”, designed to subtly mimic the naturally marbled pattern of Agate on rings and mourning brooches. 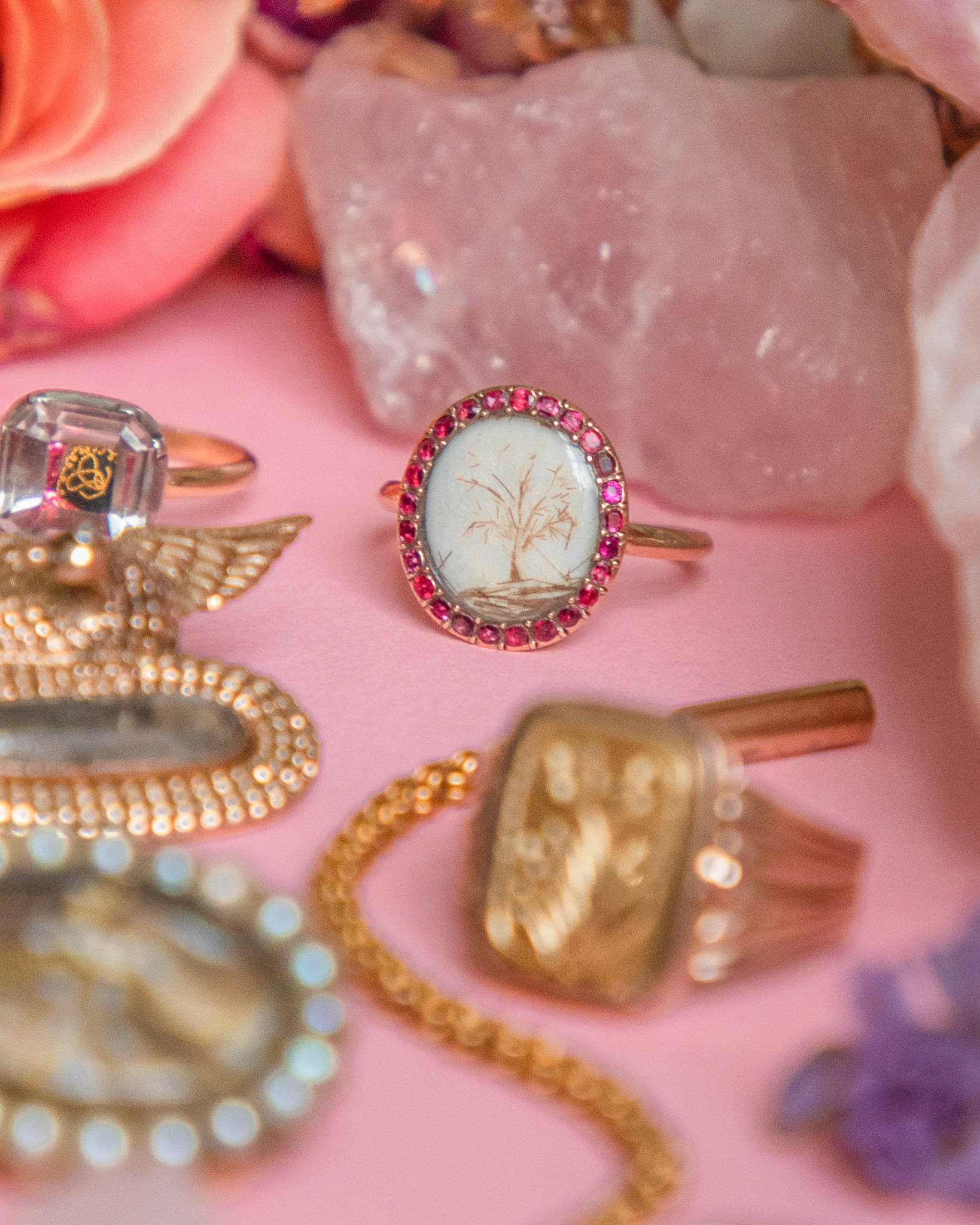 What is Whitby Jet Jewellery?

Adoration for Whitby Jet mourning jewellery sparked in 1830 when George VI died, with the Lord Chamberlain’s office setting the official respectful dress code and stating, “the ornament shall be jet”. The black gemstone is an organic material formed by the compressed wood of the spiky Araucaria tree, specifically sourced along the coastline of North Yorkshire between Robin Hood’s Bay and Boulby.

The stone’s softness and ability to be highly polished meant full suites of jewels would include a Whitby Jet necklace and Whitby Jet rings, earrings, bracelets and brooches to adorn the wearer. The trend reached a fever pitch after Prince Albert’s death in 1861 when there were 204 Jet workshops recorded in the country, compared to just 50 11 years prior. Deliciously gothic, the deceptive lightness of Jet allows pieces to be suitably grand, forming bulbous strands of beads or pendulous plates carved into detailed reliefs. The goth spirit of Whitby lives on, not only in these prized antiques but Whitby Goth Weekend! 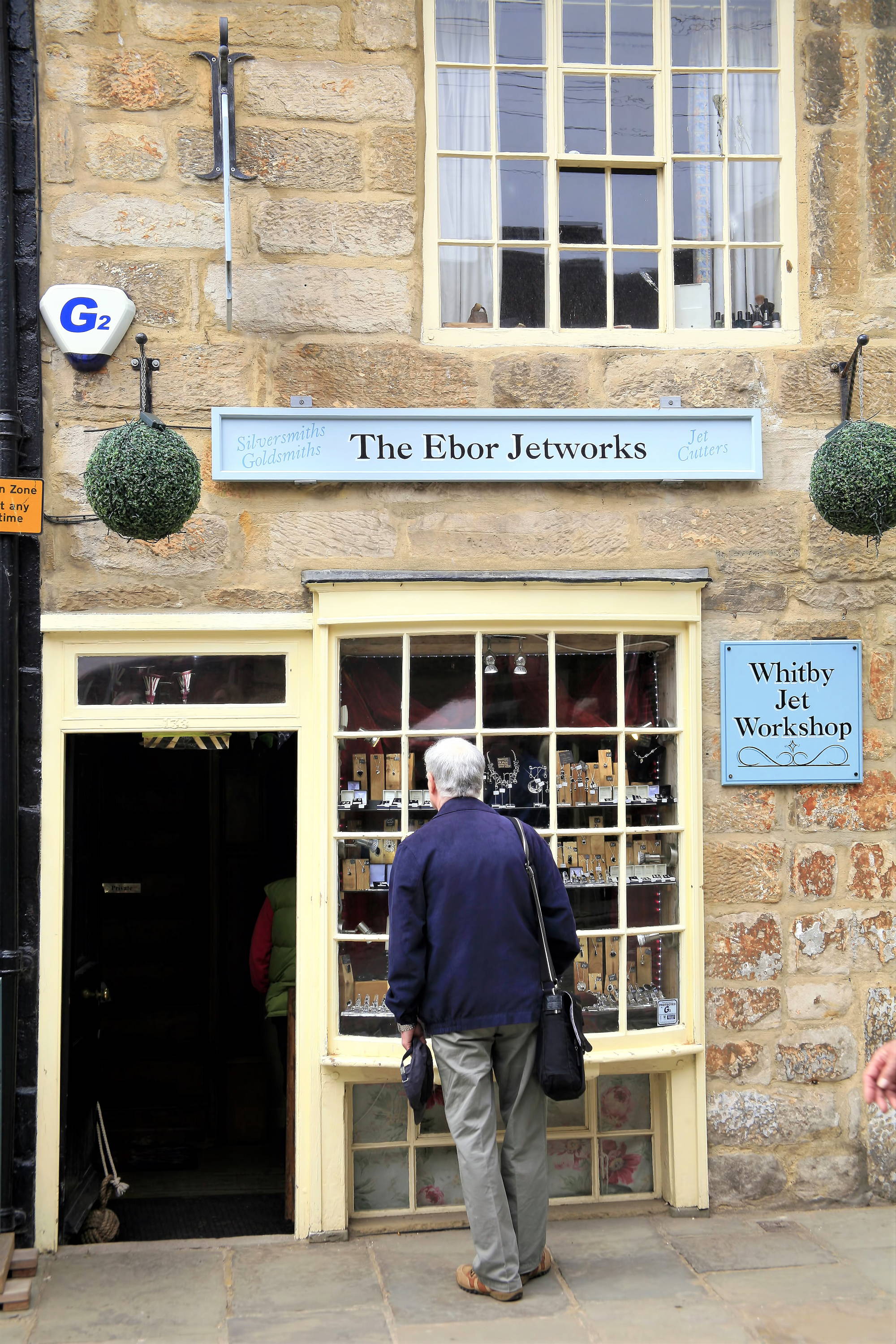 If the personalisation of an Antique mourning pendant or a Victorian mourning ring calls out to you but you’re more sweetness and light than doom and gloom, there are plenty of romantic niches to explore. Enduring icons of memorial jewellery include religious symbols like an antique Gold cross or the eternally sweet Forget Me Not memorial jewellery. Coloured gems in less outspoken mourning jewellery also carry meaning, with Pearls representing tears and Turquoise translating to “thinking of you”. Alternatively, if you are privy to Egyptian revival, the 19th century fascination with scarab jewellery was also linked to immortality and the circle of life, giving mourning jewellery a creepy crawley edge! 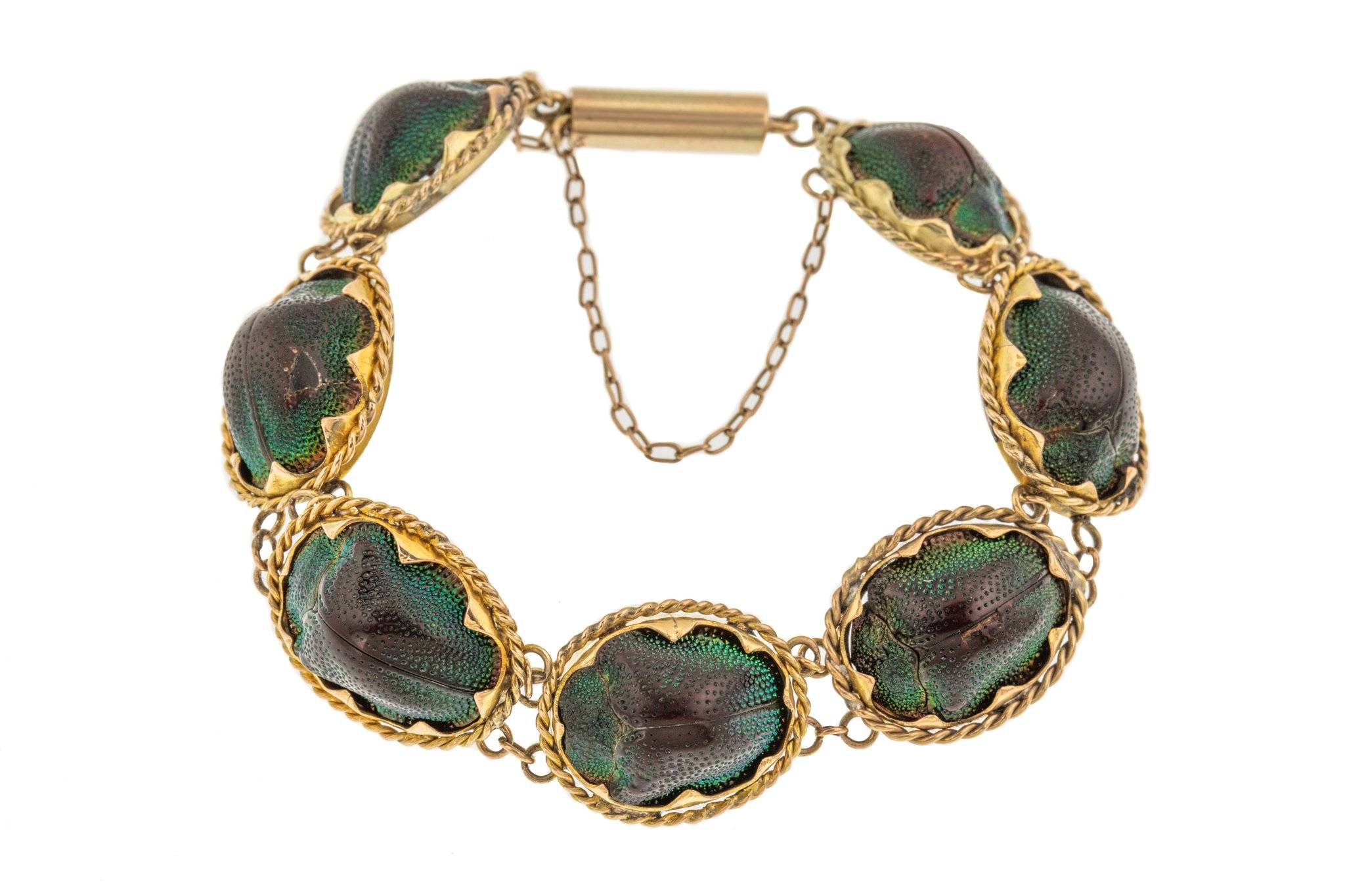 Today, mourning jewellery and Memento Mori jewellery continues to enchant goldsmiths and fashion designers today. From the famous designers of Alexander Mcqueen and Vivienne Westwood to independent business like SLAB jewellery, it just proves that perhaps it is better to have loved and lost, than never to have loved at all! 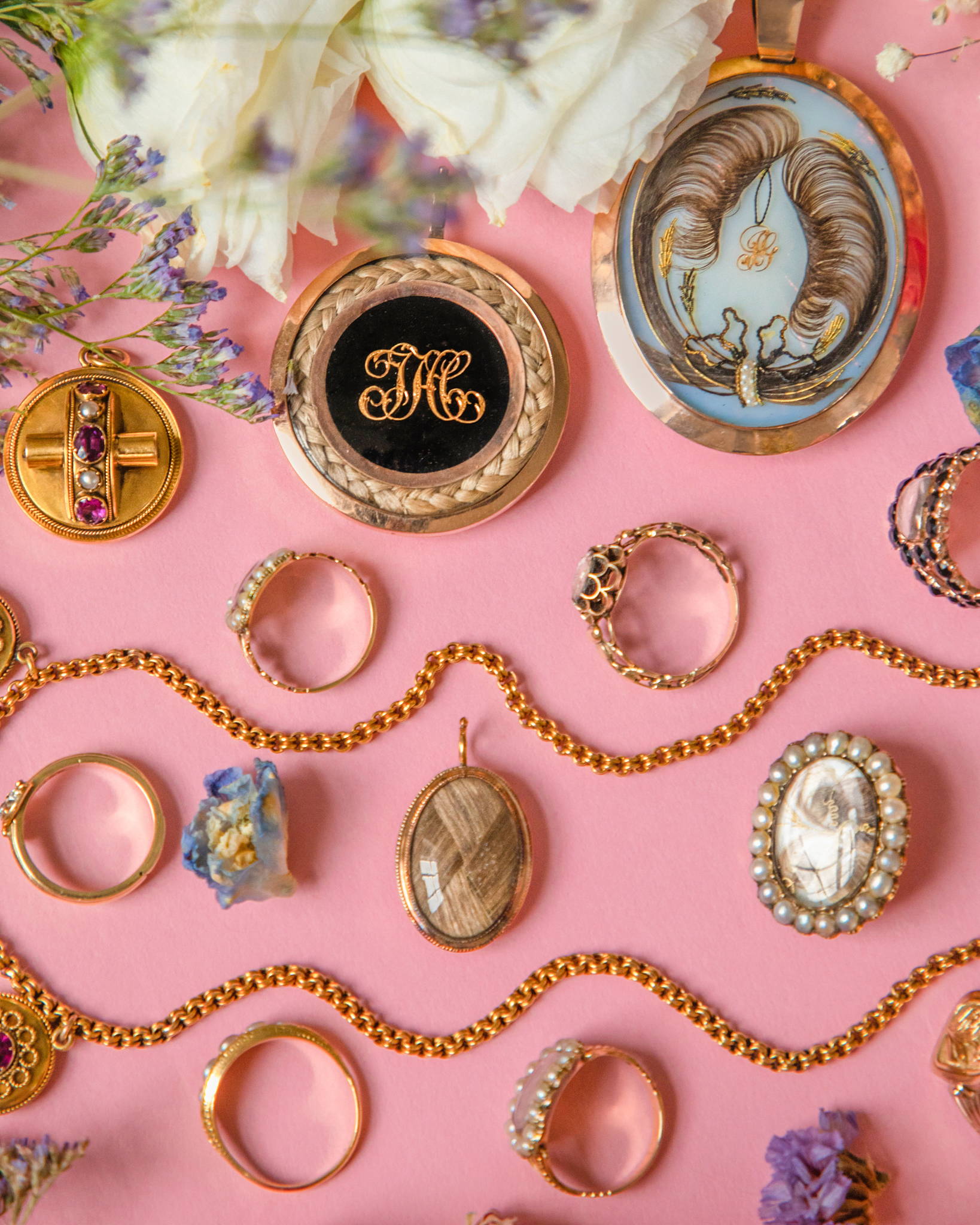 Whether an ornate large antique cross takes your fancy, or your daily dress code is “black is the new black”, transport yourself through time with our mourning jewellery UK collection. From 9ct Gold memorial jewellery to Georgian and Victorian mourning brooches, we have pieces for all tastes. Perhaps this “secret love” ring would take your fancy, or this brash and bold rare Georgian Opaline mourning pendant.

But what about Memento Mori? You can read all about the history and lore of Memento Mori jewellery here!