A Short History of Men's Jewellery

For men, especially those in Western cultures, traditional thinking has for many years dictated that jewellery should be subdued so as not to appear flamboyant or “too feminine”.

This cultural norm is not indicative of the interesting and extensive history of male jewellery. While the past century has mostly restricted men’s jewellery to a fancy wristwatch and maybe one ring, history shows men’s fondness for adorning themselves in all manner of luxurious accessories.

In the ancient ages of mysticism and the founding of civilisations, jewellery played the important roles of imbuing magical powers and signifying leadership. Claws and fangs were perforated and strung into necklaces, as they were believed to confer the strength and power of the animal to the wearer.

One such prehistoric necklace made of eagle talons was found in Croatia that was most likely worn by men 130,000 years in the past. In North Africa, a shell necklace dating back 82,000 years was discovered.

Religious orders in Ancient Egypt were made up of gilded men. Gold, Silver, and precious stones were revered as bridging the gap between mortals and gods. By covering their heads, necks, and arms with jewellery, priests and shamans could be closer to divinity and wield spiritual influence over their followers more strongly.

Perhaps the earliest example of men’s jewellery being practical is the signet ring of the pharaohs. Such a ring had an official seal of royalty used to mark letters and documents. The Louvre has Tutankhamun’s signet ring on display. Signet Ring with Tutankhamun's Throne Name, c.1336 BC -1327 BC, Source - The Metropolitan Museum of Art

In Ancient Greece, powerful men decorated their heads with laurels and draped their shoulders with garlands. Depending on the plant, these accessories showed which of the Greek pantheon of gods men of influence held in high esteem.

The Celts crafted some of the finest jewellery in the Metal Age. Tribal chiefs wore elaborate Silver and Gold pieces, while common men had iron, bronze, and copper accessories. 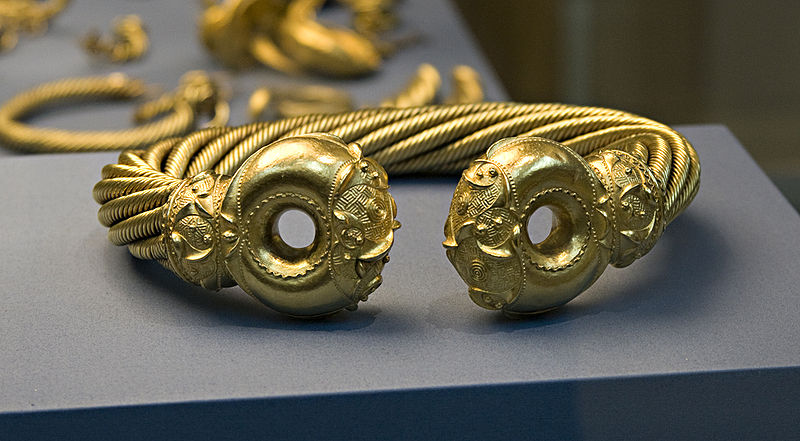 Men’s Jewellery in the Middle Ages

As patriarchal beliefs rose in the Middle Ages, men’s jewellery started becoming more distinct from women’s jewellery. Signet rings increased in popularity, as markers of loyalty gained more importance among feuding noble families. These pieces also continued the idea of men’s jewellery serving both as symbols of wealth and as functional items. Trade between Europe and Asia opened up in this period, and with it came the introduction of precious stones exotic to societies on both sides. From then on, all kinds of gems were encrusted into Gold and Silver and sewn into clothing made for nobility and royalty. Fashion had its beginnings for men of power.

The association between jewellery and the supernatural was still strong at this point in history. Men wore pieces etched with various markings as talismans to ward off evil spirits and gain mystical powers. The mark of a scorpion on a ring, for instance, was believed to grant healing on the wearer.

Men’s Jewellery in the Renaissance

The late Renaissance period was a boon period for men’s jewellery. European kings were bedecked in finery as seen in their portraits: Charles V was depicted in a ceremonial suit of armour lined with Gold jewellery in Titian’s portrait of the Holy Roman Emperor; Charles I of England was known to wear one large drop pearl earring, which became fashionable for men in the 16th century; Henry VIII’s portrait by Hans Holbein showcased the monarch’s bejewelled garb and glittering accessories. Jewellery in fashion extended to the exciting life of explorers as well. Sir Walter Raleigh paired his Silver-embroidered doublet with a double-pearl earring. Men of the sea pierced their ears with hoops of Gold and Silver. Apart from being an aesthetic choice, the hoop earrings could also be used to pay for their proper burials, as an untimely death was an all too common fate for sailors and pirates.

Martial tradition also enjoyed a touch of glamour, as soldiers had decorative uniforms and even swords with Gold hilts and pommels studded with gemstones. Indian royalty were adorned in jewellery as well. From the Mughal to the Maratha empires, the male rulers covered themselves in jewels and precious metals to signify their authority and opulence.

The 18th century also saw the invention of the watch chain. This timepiece became a staple for men’s wear in Europe, with fitted clothes necessitating the placement of watches outside one’s tiny pockets.

Men’s Jewellery in the Industrial Age and Onwards

Industrialisation made jewellery more accessible to the masses, but with this accessibility came guidelines for how men should wear jewellery.

The Gentlemen’s Book of Etiquette and Manual of Politeness by Cecil B. Hartley was published in 1860, detailing how a gentleman should conduct himself, including his fashion sense. Hartley reiterated the need for jewellery to be of practical use, and never just for ornamental purposes. Wristwatches, which were first more popular with women, became the foundational accessory that adhered to Hartley’s code of functional jewellery for men. Classy tie pins and cufflinks for cravats and sleeves also rose to prominence.

In an effort to distinguish themselves from the burgeoning middle class, the remnants of Western royalty discarded classical styles of jewellery for East Asian and modern designs.

By the 20th century, the conservative look for men was solidified with only the subtlest pieces of jewellery, such as pocket watches and flat, basic chains to lightly contrast with dark suits.

It wasn’t until the cultural changes ushered in during the 60s that men started wearing bold chains, bracelets, rings, etc once more. Those particularly deep in the various counter cultures of the British post-war era from rock n roll and punk through to hip-hop and grunge would put on loud jewellery that was integral to their identities.

Today, men of means who aren’t looking to make big fashion statements are far more comfortable with making bolder statements through jewellery. Perhaps our increasingly pluralistic and open global culture, along with the continuing blurring of gender roles, will result in a new renaissance for male jewellery, much like the one witnessed in the 16th and 17th centuries (albeit this time with Instagram!)